They met at UNM Johnson Field to share their reaction to the guilty verdict in the George Floyd case. A jury found former Minneapolis Police Officer Derek Chauvin was found guilty on all three counts relating to the death of Floyd.

Following speeches at Johnson Field, the group marched to the bookstore. There, they kneeled for nine minutes and 29 seconds, the same amount of time Chauvin kneeled on Floyd’s neck.

Organizers said the rally cries of the last year helped get justice. 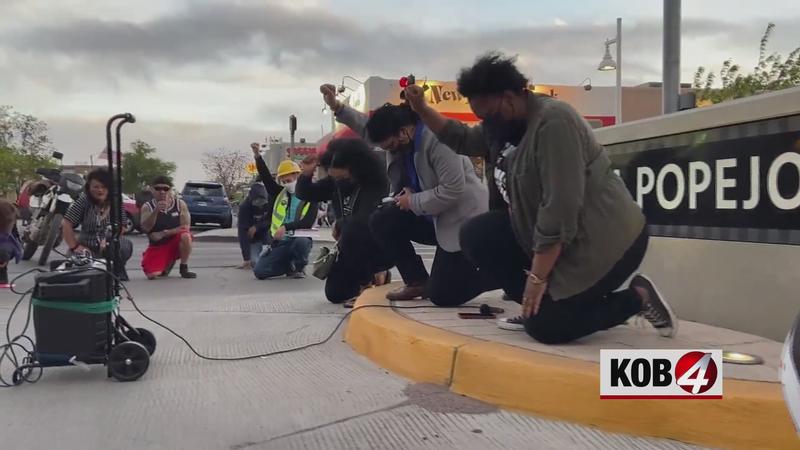 "I’m so thankful for everyone who fought. That’s the only way things are going to change," said Nikki Archuleta, founder of Black Lives Matter ABQ.

The gathering wasn’t just about Tuesday’s verdict, activists said it was also a reminder that work still needs to be done.

"I’m hoping that this re-energizes our community to know that we can get justice," Jordan said. "You know, it is an example of a Black man’s life matter, and today, a black person’s life mattered today. So now we have to continue to push and press until we get justice for all people of color."

Jordan added that the guilty verdict was personal.

"My son is 17 years old, he just started driving now. I installed a dash cam in the car as soon as he was able to drive on his own. I’m stressed out every time he leaves our home to go somewhere. It stresses me out," Jordan said. "And so today when we were watching, waiting for the verdict to come in I had such high anxiety, but when it came in, and it was guilty on all three charges, I was able to nonverbally let my son know that his life matters because he was there watching that with me, and that really meant a lot to me today, and I’m hoping that we can continue that in the future."