ALBUQUERQUE, N.M. – Attendance at the New Mexico State Fair was down by over 40% this year, but New Mexico wasn’t the only state fair that saw lower numbers.

Before the fair, Gov. Michelle Lujan Grisham announced vaccines will be required to attend and many folks complained saying they would not go this year, and it turns out a lot of people didn’t.

There were the state fair staples, turkey legs, carnival rides, and the green chile cheeseburger contest. But fairgoers noticed the lines for all their favorites were much shorter.

"It’s very different because the crowds aren’t here and you can get right up to any ride or go buy any treat or food without waiting in line, its wonderful I think," Mary Romero told KOB 4 back in September.

Expo New Mexico said part of the reason attendance was so low was they had to cancel the junior livestock show and sale.

"The recent rapid uptick of COVID cases, combined with the new public health order, has made it problematic for some families to attend the fair this year," Livestock Manager Brittni Allerkamp said in a statement before the state fair started.

Instead, many 4-H families went to a private showdown in Roswell that did not require vaccines.

But the New Mexico state fair isn’t alone. Even some of the biggest state fairs in the country saw lower turnouts this year, regardless of a vaccine requirement.

The Washington State Fair had no vaccine requirement but did require face masks. They saw a 20% decrease in attendance.

The Great Minnesota Get Together saw a 38% decrease and had no vaccine requirement.

There was a 40% decrease over at the New York State Fair. They had a mask requirement but not a vaccine requirement.

Finally, two states that had no COVID restrictions, Iowa and Colorado, saw only slight decreases of 6% and 2% compared to their 2019 fairs.

As for money, Expo New Mexico hasn’t released any official revenue numbers yet. Back in 2019, the fair brought in around $5 million. But, with the decreased attendance, officials expect revenue to also be lower this year. 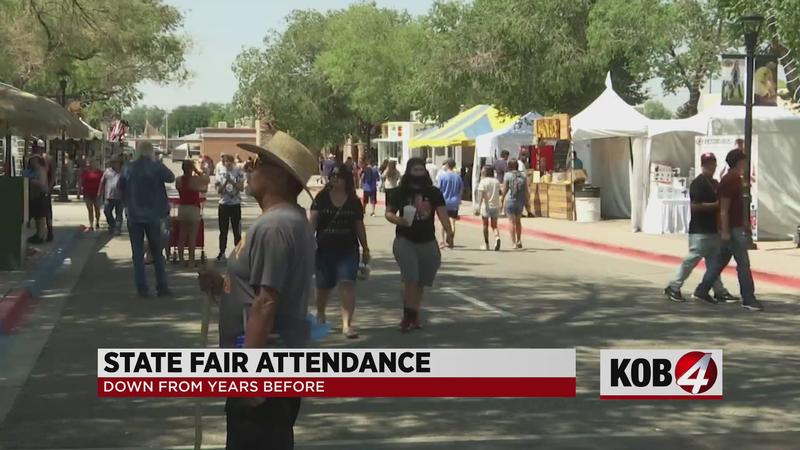