However, the McKinley County undersheriff talked with KOB 4 about what actually happened. He said there was a lot of confusion because the chase not only crossed county lines – bringing in multiple law enforcement agencies – but those agencies made an effort to stay off the police radios because they didn’t want to tip off the inmates, who had a radio inside the stolen van.

"Around two o’clock on Monday yesterday, one of our deputies picked up three inmates from the Bernalillo County detention center for transport back to Gallup, New Mexico," MCSO Undersheriff James Maiorano said.

In the van, Maiorano said the two male inmates, 35-year-old Joshua Hall and 36-year-old Rickie Billie, were shackled and handcuffed in the back. A third female inmate, 45-year-old LaCosta Reeves, was shackled in a separate side compartment.

"The deputy heard commotion in the back and one of the inmates stated that he was having a medical episode," Maiorano said. 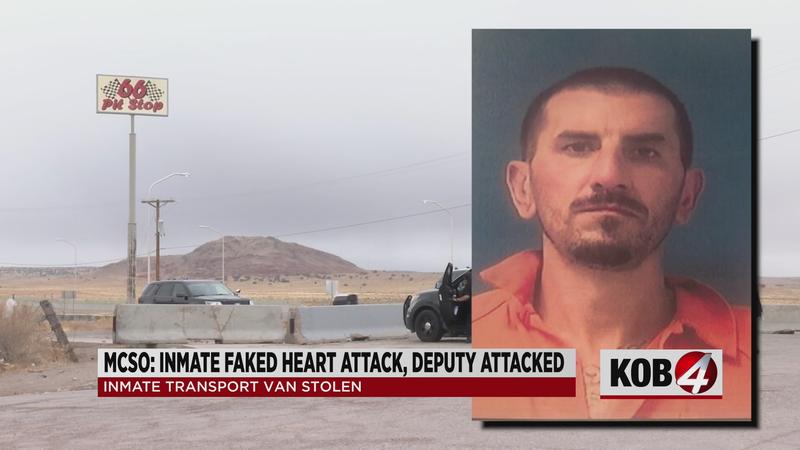 The undersheriff said it was Hall, claiming he was struggling to breathe and was having a heart attack. The McKinley County deputy driving the van reportedly pulled off at the Route 66 pit stop, but not before letting dispatch and his supervisor know what was happening.

"The deputy opened the door to check on the prisoner," Maiorano said. "The prisoner had already slipped his cuffs, so Hall had slipped out of his handcuffs. He attacked the deputy. They went to the ground, there was a short scuffle. Hall retreats and gets into the driver’s seat of the van."

Maiorano said the deputy continued to fight with Hall, trying to get him out of the van.

"Hall manages to get the vehicle into drive and drives off, knocking the deputy to the ground, and, in doing so, takes off with the two prisoners that are still locked in the rear of the van," he said.

State police reportedly caught up with the van near the To’Hajiilee exit – around 3:45 p.m. – and chased Hall for 30 miles west on I-40. Around exit 102, Hall abruptly veered the van off the right shoulder and drove through a fence and into an open field.

Cibola County deputies were reportedly there to help state police pin the van in, so Hall couldn’t get away. Maiorano said Hall was taken into custody at the Cibola County Correctional Center in Milan.

Hall was charged with assault, assault with intent to commit a violent felony and battery upon a peace officer, disarming a peace officer, resisting or evading or obstructing an officer, escape from jail and false imprisonment.

Hall was found to have been guilty of a previous offense of receiving/transferring a stolen motor vehicle.

Upon removing his ankle shackles at the Cibola County Correctional Center, they found damage to the shackles consistent with a drill bit allegedly used to remove the shackles.

"They were not culprits in this particular incident," Maiorano said.

Both the Bernalillo and Cibola County sheriff’s offices are investigating. A motion for Hall’s pre-trial detention was filed with the Cibola County Magistrate Court.