FARMINGTON, N.M. – 24 hours – that is how long an Aztec woman and her dog spent hiking through Bisti Wilderness, camping in below-freezing temperatures without a jacket.

The San Juan County Sheriff’s Office dispatched a helicopter rescue team Monday morning. Body camera footage captured the moment a deputy encountered Brown on the ground and helped her safely board the aircraft.

“Thank God you found me," Brown said. “I could not find my way out of here."

Brown and her dog, Annie, left their Aztec home Sunday around 9 a.m. She told KOB 4, she was not planning to be gone for very long.

"I realized, I didn’t have a coat,” Brown said. She continued ahead anyway, a decision she said she would later regret.

“Two o’clock, I started walking back and couldn’t find anything that I recognized."

After four hours of struggling to navigate the maze-like washes in the badlands, Brown used the remaining 4% of her phone’s battery to let her husband and a friend know where she was, and that she was lost.

Before her phone died, her husband told her he called the Sheriff’s office. By then, the sun had set. Rescue crews were not able to get to Brown until the next morning.

"I went to shake her hand, and I immediately felt how cold she was, and so I put my other hand on top of her hand,” Allison said. “Her hand was a purplish, reddish color, and it was just—just cold was rolling off of her in waves."

Rescue crews say temperatures dropped into the teens Sunday night. Brown told them she hiked 20 hours before finally sitting down to make a fire.

"I heated rocks up in the fire and put them on the core of my stomach and on my feet and everything like that," Brown said. "I was more scared for the dog because she’s never—you know—she kept looking up at me like, ‘is it okay, Mom?’"

"I told her that she’s the most prepared one we’ve had to come down and rescue down there, with that survival kit, and able to make a fire,” SJCSO Sgt. Gary Mauldin said. “So that’s good to see."

Even during the summer, Sgt. Mauldin said the Badlands can get very cold at night. The sheriff’s office said it encourages hikers to wear layers and always prepare to stay out overnight, just in case they get lost.

Brown said a good attitude is also helpful in an emergency situation. 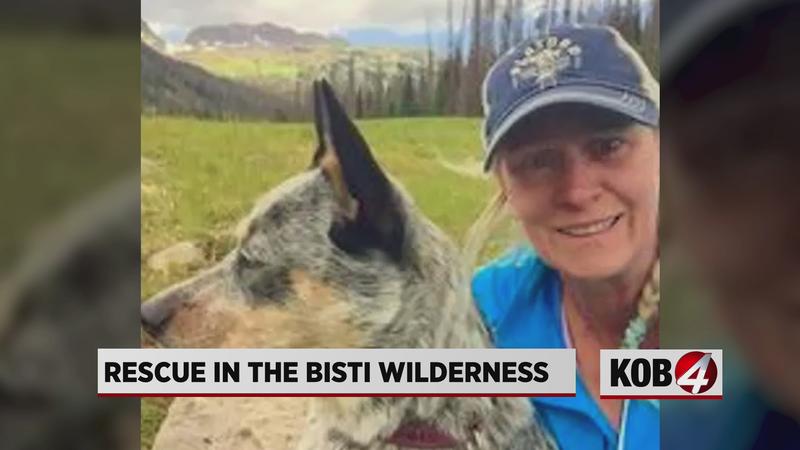