ALBUQUERQUE, N.M. -Plenty of folks were out eating at Backstreet Grill Sunday in Old Town. The problem is, that restaurant is supposed to be closed according to a court order.

The city took away the restaurants food permit months ago, after they were allegedly not following COVID protocols. Then last week, a judge ruled Backstreet Grill should close until their next court date this coming Tuesday.

When asked why they are open after being told to close by a judge the manager on duty, who didn’t share her name, said “We don’t have any of those papers.”

Those papers include court documents that states the Backstreet Grill was served a restraining order and is not allowed to be open until their next hearing. But KOB wasn’t the first person to bring these documents to the restaurant. 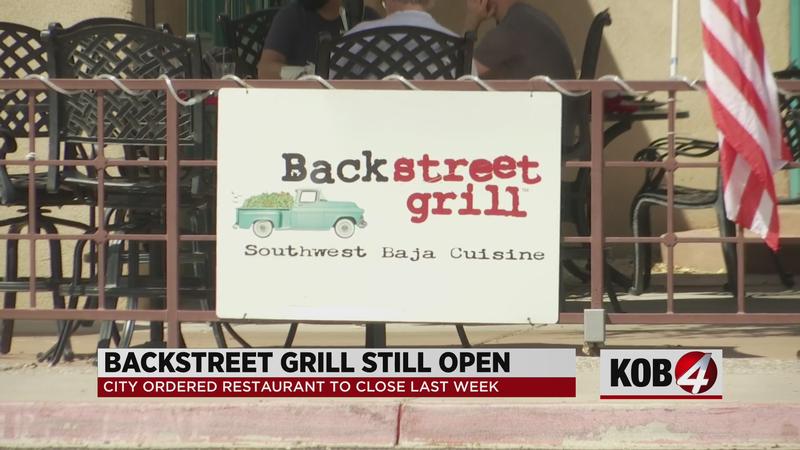 According to the Second Judicial District Court, Backstreet Grill was served these documents twice. This past Tuesday, lawyers representing Backstreet Grill "Agreed to accept service on the respondents behalf."

Then again on Friday another service was made directly to the Backstreet Grill where a manager named Sasha accepted to court documents.

But when asked, the manager on duty Sunday said this is the first she’s hearing about the situation.

“No look I’m just doing my job like you are doing your job everything is alright," said the manager.

"We are aware that Backstreet Grill continues to operate without a permit, and have done so for some time. It’s unfair for all of our other regulated facilities who consistently meet our requirements that are in place to keep the public safe and healthy. It’s our obligation to the law, our community, and other permit holders to pursue enforcement in this matter and bring them into compliance with the law."