ALBUQUERQUE, N.M. – A judge threatened the Backstreet Grill’s attorney with possible sanctions, all because of a truly shocking letter to the court.

The letter was written in response to the temporary restraining order against backstreet grill, it went off into a tangent about the attorney’s personal beliefs regarding the pandemic, which involved name-calling, cursing and insulting judges who have been vaccinated. And while the attorney did apologize, she didn’t seem very apologetic.

In her 40 years of being an attorney, Ana Garner, said she has never written anything like this.

"I just wanted to show them, you want to play insane? I can play insane too. So I wanted it to be shocking,” said Garner.

In this legal response to the court. Garner did not hold back her thoughts about masks, vaccines, and mandates.

"And yes, I liberally used a couple of swear words,” said Garner.

In part of the letter, she called masks a face diaper– and then went on and compared mandate enforcement to Nazi Germany, called Gov. Michelle Lujan Grisham a "phoney" and said vaccines are experimental gene therapy.

"As the judge said, I think that I insulted every branch of government," said Garner.

She even criticized any judge who was vaccinated.

"If they drink the Kool-Aid, and they didn’t do any more research about an experimental dangerous product than that, then they obviously have been programmed to where no rational or reasonable argument is going to reach a person like that," she said.

She made that claim — even though the COVID vaccines have been proven to be safe and effective.

While this could be seen as a passionate attorney expressing her opinions — UNM Law Professor Josh Kastenberg said it’s really crossing the line when it comes to courtroom decorum.

"There is no point in writing something like this,” he said.

He teaches students how legal documents should be written, saying name-calling and cursing absolutely goes against what is acceptable.

"If you want the court to take you seriously, you don’t insult the court. If you are angry at the court, there is a better way to write it than this," said Kastenberg.

Which is why a judge asked Garner to apologize to the court and withdraw the letter, or face possible sanctions.

"She did request that I withdraw it, and I did withdraw it. But I meant every word of it," said Garner.

For Backstreet Grill, Garner said they are officially out of business and right now have no plans to reopen.

However, its legal team are currently looking at filing damages against the city and state for the shutdown. 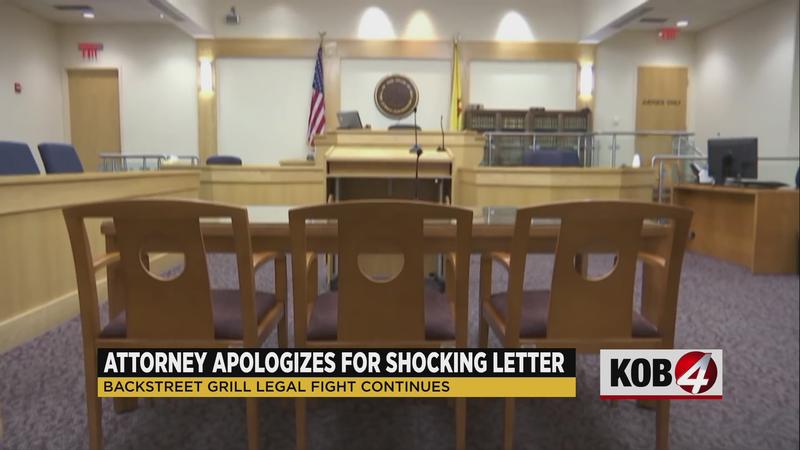