ALBUQUERQUE, N.M. – The ABQ BioPark on Tuesday announced an infant siamang died of a bacterial infection that has plagued the zoo over the last month.

Earlier this month, Rue’s mother – Johore – also died from Shigella. Rue’s diet was supplemented with formula in a bottle and she received 24/7 care from staff.

“Baby Rue was behind from the beginning, his mom was ill, and we were fighting even when she was alive to make sure he was getting the nutrients he needed. She was ill he was also ill and when she passed sadly we had to care for him 24/7,” said Stephanie Stowell, executive director of ABQ BioPark.

Rue, a four-month-old siamang, passed away early Monday morning due to complications of the Shigella bacterial infection. Rue is the fourth ape to die from Shigella since it was detected last month.

“He was never thriving honestly it was ebbs and flows, and he lost too much weight and it was too much for his little body to endure,” said Stowell.

Rue’s brother – four-year-old Eerie – was also infected with Shigella but has recovered well. The BioPark is looking to pair Eerie with another siamang group until he reaches adulthood.

“They live in large family groups so for us, we want that for Eerie, so our first step is to work on the species survival plan for siamang to find another AZA accredited facility that can welcome him into a group,” Stowell said.

The BioPark said they are ‘cautiously optimistic’ about the other apes on the road to recovery.

“Eerie is outside swinging around like a siamang is supposed to because he is feeling better,” said Stowell. 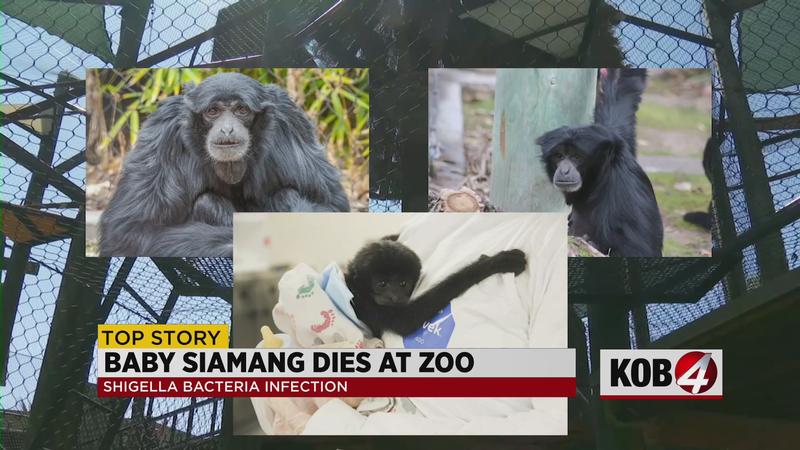