ALBUQUERQUE, N.M. – Cameron Donner and his girlfriend had planned a mini-vacation to New Mexico for Balloon Fiesta.

"Two years ago we had an absolutely phenomenal time," Donner said. "It was one of the best experiences of my life."

This time they brought their rescue dog, Cabo, with them.

"I adopted this dog during the pandemic, which was a very difficult time for everybody," Donner said. "Cabo really stuck with me and just brightened our lives."

However, just 30 minutes after they arrived in Albuquerque, Cabo escaped. 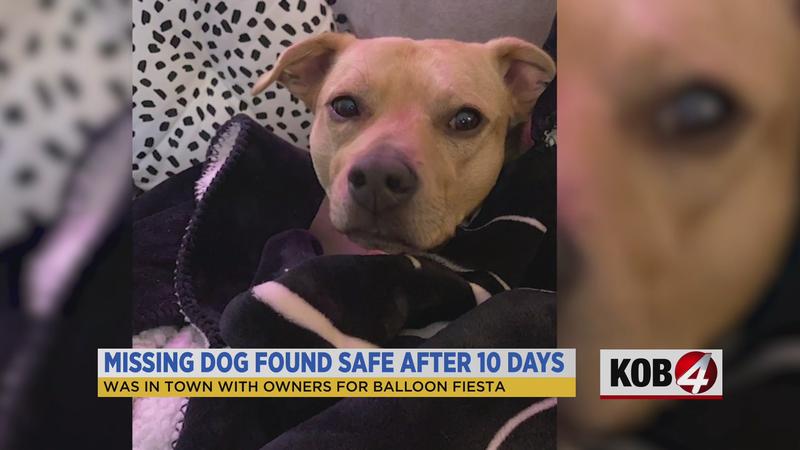 "By the time we tried to get him to come back to us, he had just bolted," Donner said.

They knew their rescue pup was timid because he came from an animal hoarding situation.

"You’re panicking. You’re not really sure what to do," Donner described. "My girlfriend, her dad, mom, her stepmom had gotten into a car. I caught up to Cabo and he immediately started taking off down that sidewalk; like absolutely sprinting, jumped a fence, then into somebody’s backyard and then jumped over onto a homestead. After that, I had completely lost sight of Cabo."

They searched for 10 days.

"We were devastated," Donner remembered. "We didn’t sleep that night."

They made flyers and posted about Cabo on Nextdoor, Craigslist, Facebook.

"We really didn’t know how long Cabo was going to make it out on his own," Donner said.

The community stepped up – they shared that information and even showed up to search too.

"We were very determined to find this dog," Donner described. "We were up at three, four o’clock every morning, down in the Bosque with spotlights along the Rio Grande searching for him."

On day eight, they spotted Cabo but he took off again.

"It was very heartbreaking but very reassuring seeing that he was okay and that he did look good," Donner said.

Two days later, there was another sighting but this time, as Donner describes, "for whatever reason, I shined my flashlight over to the right of me about 30 feet or so to the riverbank and he is just standing there looking directly at me. I had leftover pieces of chicken and his harness in my hand so I just got down to my knees and slowly called them over, you know, ‘Come on, buddy. Come on over,’ and he slowly just zigzagged over to me completely dirty, full of mud, wet and clearly underweight. His collar was drooping way below his neck – and he just slowly walks over to me. I could tell he had just…had enough of being out there – I mean, he had seen quite a bit and had probably the biggest experience of his life,"

"I pulled him into my arms immediately, Donner said. "It was very emotional sobbing and I called my girlfriend on FaceTime and she was so happy."

Now, Cabo is safe at home.

Donner is thankful that this community showed up for a stranger and even said, "I met some wonderful people throughout this whole experience."