ALBUQUERQUE, N.M. — There are more positive signs for the future of businesses and other places in New Mexico.

The governor’s office announced many changes to the Red-to-Green reopening system on Wednesday that ease certain restrictions, including adding a Turquoise level for counties that stay in the Green for four weeks.

Reaction from local businesses included a mix of positivity and frustration.

Bar and club owners say any boost is helpful, but they gave a range of responses, from saying they may reopen or expand if they can profit, to saying they’ll definitely do all they can. 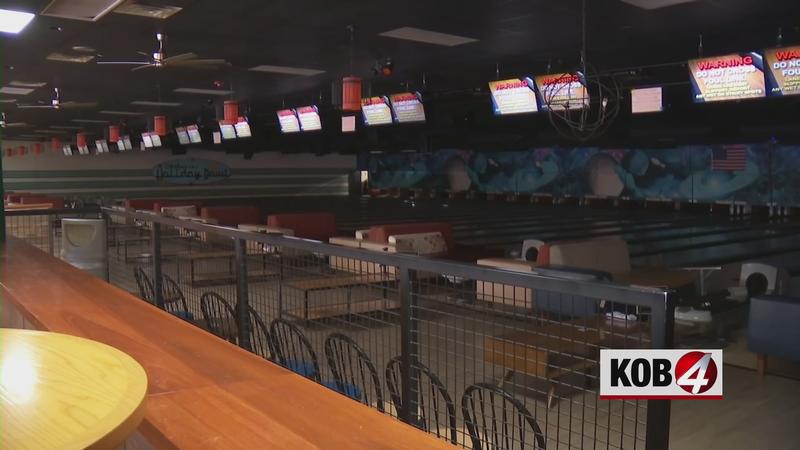 O’Neill’s Pub, which has two Albuquerque locations, wants to take advantage of every opportunity it can. It’s ready to get the neighborhood feel back at the bar.

“We’re pretty much ready to open up whenever we get the green light, so we’re excited. We’d love to sit people at our bar again, and I think a lot of folks miss it and are eager for it to come back,” said General Manager Skyler Whitehead. “The pub is supposed to bring people together, and so I think that’s what we’re most excited about.”

He says business has been okay with indoor and outdoor dining. He’s really thankful for the support O’Neill’s has received from regulars.

Reopening the bar would mean workers get more hours and about 10 more employees can come back in, Whitehead says.

Skidmore’s Holiday Bowl on Lomas in northeast Albuquerque is itching to turn the lights on over its lanes.

The last time there was large-scale bowling was March, and that accounts for half of their business. They let go of 55 workers. They say they’re doing all they can with food service.

“Beer, pizza and bowling. They kind of all go together, and we’re missing that big element,” owner Gary Skidmore said. “My employees are dying to come back to work. They are tired of sitting at home. They’re ready to go and do what they like to do.”

They say they’ve taken advantage of grants and loans, but they’ve been losing 35,000 dollars a month. They feel like bowling should have the green light right now.

“It felt like I’d been punched in the stomach. I feel indoor recreation has really been punished in this situation. You can go to a gym, which is indoors, and we can clean and sanitize better than any gym in this state,” Skidmore said.

Holiday Bowl opened in 1958, and Skidmore says 2019 was their best year ever after finishing some renovations.

They think some other metro bowling alleys have had to close for good.

Skidmore says a bowling association based in Texas found that New Mexico has been one of only three states that hasn’t allowed bowling.

Metro residents may be able to see a movie in theaters in the not-too-distant-future.

The announcement is the first piece of good news for theaters since they had to close down in March. With many struggling, KOB 4 has asked company representatives about which ones would be able to immediately reopen if Bernalillo County hits the Green level.

New Mexico is the only state in which movie theaters cannot open.