ALBUQUERQUE, N.M. — Monsoon season has led to a lot of flash flooding and dangerous conditions this summer.

Belen was dealing with people trapped in cars, but thankfully no injuries were reported.

But it was a different story in Carlsbad a week before, where one man died after his vehicle was swept off a flooded road.

First responders had to rescue four people using an airboat.

The Bernalillo County Fire Department went down to Carlsbad and stayed for three days after Eddy County asked for their help because of all the storms and flash flooding. 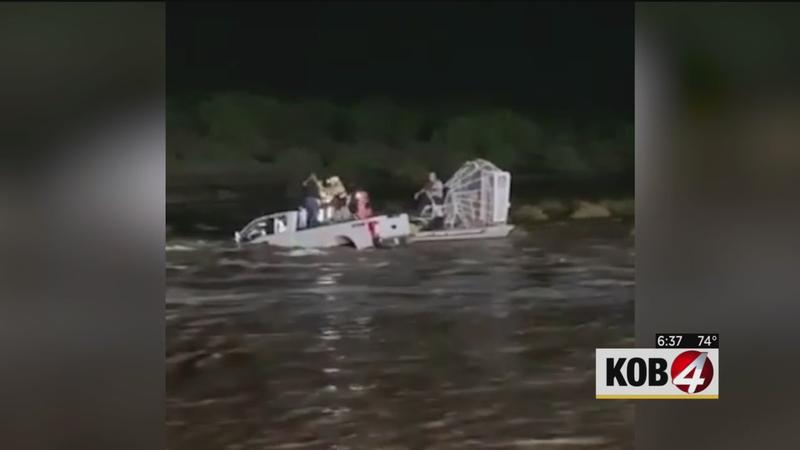 Cell phone video shows what used to be a road looking more like a river with rushing water and debris everywhere.

"We typically operate the boat on the Rio Grande, which I’m very familiar with, but going down to Carlsbad, it’s an unknown situation," explained Joshua Ellis, Bernalillo County Fire Department’s training chief.

Ellis has spent almost two decades with BCFD, including ten years as a pilot operating the airboat. Also onboard were two crew members, including Christian CdeBaca, who’s been with the department for five years but was new to the aquatics team.

"It’s been about a month now since I joined the team," CdeBaca said. "We know our bosque really well. And going somewhere we had never seen before, it was kinda nerve wracking but felt confident with our really good boat pilot."

Two people trapped on a truck was their first call.

"They didn’t know what was goign to happen," said CdeBaca. "The truck could’ve broken loose and gone further downstream."

"A lot of flooding. A lot of roads that were flushed out. A lot of fast moving water," said Ellis.

The team was able to get close, put life jackets on the two people stranded, and get them to safety.

"You can also see the look on their face. You can see they do look kinda remorseful for us having to risk our safety for them making a bad decision," CdeBaca said.

First responders said many of these rescues are avoidable.

"If there’s barricades, barrels or trucks, don’t go through those areas," urged Ellis. "You never know how deep it’s gonna be. It’s very hard to tell when fast moving water of that nature has a lot of dirt and debris going through it… you can get swept away. you can get hit by the debris, so it’s best to avoid it and not go around those barriers."

"We are trained; we are prepared to respond to that," explained CdeBaca. "However the less is better. So if you can acknowledge those warnings, it’s safer for all of us."

The next call came as first responders were on their way back.

"We actually got pulled over by a Chavez County sheriff’s deputy who let us into another area where two more people were stranded and needed rescue," Ellis said.

The crew spent a total of three days there.

"Going into that situation, we just hope that everyone’s staying home and being safe," CdeBaca said. "Unfortunately the ones that do go out – we’ll be there."

BCFD is one of a few agencies in New Mexico with airboats.

On top of asking people to stay safe, they’re also urging other first responders or county/city leaders to reach out to their team if they need that assistance. Just contact the state’s Emergency Management Office.