NEW MEXICO – People have sung about walking 500 miles and walking a thousand miles but one California man is walking 2,789 miles from Los Angeles to New York City – dressed in a bear costume.

Bearsun is on a mission to bring awareness to multiple issues – including mental health, environmental injustice, and cancer—simply by walking, and sharing his experience on social media.

The 33-year-old California-native started his journey on April 12. He was originally supposed to trek from LA to San Francisco, but when he arrived at the Golden Gate Bridge, he decided to just keep going to San Diego and then Las Vegas

Two months later, he finished walking through the Navajo Nation on his journey from LA to New York City. While he passed through the reservation, multiple GoFundMe pages he started, raised more than $30,000.

"Each day was like a celebration there,” Bearsun said.

"The issues he’s walking for are really prevalent here on the Navajo Nation, like mental health and environmental injustices, autism, the disabled community,” said Destiny Touchine, a college student who joined Bearsun in Kinlichee, and walked alongside him for 4 days.

Bearsun said he originally planned to camp out every night, but Navajo Nation members would not let him sleep without a roof over his head.

"He never stayed in his tent while he was on our rez,” Touchine said. “He was always hosted in a Hogan or a chapter house, and people were always trying to bring him water, and snacks, gifting him bead work, and so many other pieces of art work.” 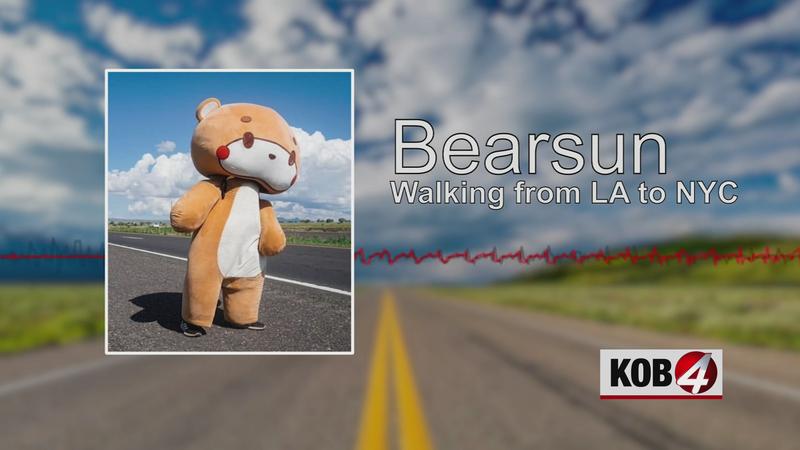 She added that after being stuck inside for so long, during the pandemic, Bearsun’s journey reminded residents of their capacity to be kind and care for one another.

Janice Taliman arranged for Bearsun to stay at a chapter house. She also took his suit and mended it while he rested in Window Rock.

"I just wanted to help a stranger who was coming through my reservation,” Taliman said.

Bearsun says he has covered more than 900 miles and set a goal to walk 25 to 30 miles a day. He also does not know if he will stop walking once he gets to New York. He says he may decide to keep going.

Even when his adventure finally comes to an end, Bearsun will not reveal his true identity, however.

He says if he does not show his true face, people can picture him any way they want.