SANTA FE, N.M. — A gun safety bill named after a 13-year-old boy shot and killed this past summer in Albuquerque will not move forward this legislative session.

House Bill 9, otherwise known as the Bennie Hargrove Act, was tabled Thursday during a committee hearing. The goal of the bill was to hold parents responsible for allowing their children unsecured access to their firearms. It was named after Hargrove who was killed by a classmate at Washington Middle School in Albuquerque. The suspect reportedly used his dad’s gun.

The bill was sponsored by Rep. Pameyla Herndon, D-Albuquerque. She attended the House Appropriations and Finance Committee hearing where the bill was tabled by a 13-5 vote. Herdon says she was disappointed in the decision calling it an unfair vote. She says the committee voted to hold the bill because of its merits not because of its financial impact.

“My first reaction was, committee let’s look at your responsibility and what you are in charge with looking at,” Herndon says. “I’m not sure why they went astray from what their focus was and the focus is on financing. So that is still a puzzle to me and I don’t know why that happened.”

After hearing four public comments, two in opposition and two in support, Rep. Randal Crowder, R-Clovis, also spoke in opposition. Then came the call to table the bill which passed. 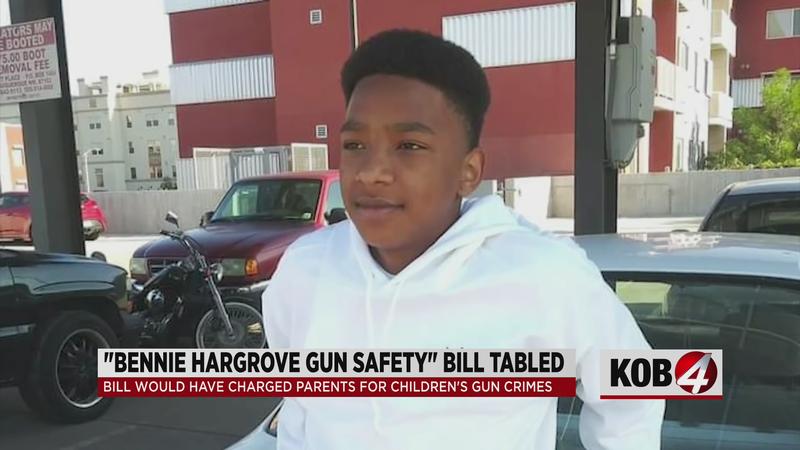 Herndon questions why the bill had to go through the committee in the first place. During the meeting, Patricia Lundstrom, D-Gallup, the Chair of the House committee, also said she was surprised the bill was in the appropriations committee. Herndon says the bill was assigned by the Appropriations and Finance Committee.

“There was no financial impact so it’s really difficult to say what really happened today,” Herndon says. “I’m still trying to sort it out.”

KOB 4 reached out to Speaker Egolf for comment and received the following statement:

“Like every bill that has proposed to create or change a legal penalty over the past six years, HB 9 was initially referred to the House Appropriations & Finance Committee (HAFC). The typical practice has been to examine the fiscal implications of penalty changes, then drop the referral to HAFC by unanimous consent, if no financial impact is found. This bill was stalled because House Republicans refused to consent to this regular practice.”