The self-declared militia started showing up to Albuquerque protests last summer. Massive protests were held across the country after George Floyd’s murder in Minneapolis. The New Mexico Civil Guard claimed they were keeping the peace at local protests.

In July 2020, Torrez filed a civil lawsuit against the New Mexico Civil Guard. He’s hoping to get a ruling from a judge that will ban milita groups from organizing and operating in New Mexico.

As part of that, the district attorney is seeking records from Facebook. He said the NMCG used Facebook to recruit members and organize actions. Torrez wants to know who created the Facebook page and who managed it.

"The latest communications we’ve had with Facebook center around the fact that they no longer hold the account information that we’re asking for and they deleted this information," Torrez said. "We find it hard to believe that a trillion-dollar tech company would be in a position such as they would delete this information and be unable to recover it." 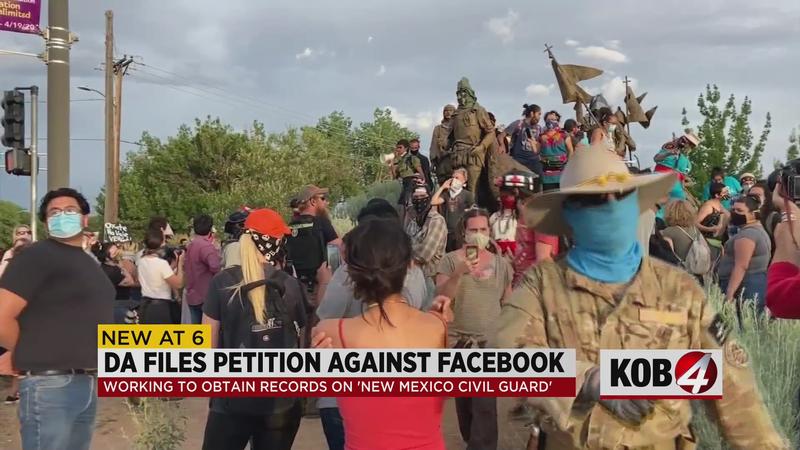 The district attorney filed a petition Monday in a court in San Mateo County, California. He’s hoping the judge there will give a ruling that will force Facebook to comply with the subpoena. Torrez expects to make his case in a California court in three to fourth months.

KOB 4 reached out to Facebook about this petition. The social media giant provided the following statement:

"We preserve account information in response to a request from law enforcement and will provide it, in accordance with applicable law and our terms, when we receive valid legal process. When we preserve data we do so for a period of time, which can be extended at the request of law enforcement."