ALBUQUERQUE, N.M. — 18-year-old Kyle Rittenhouse broke down as he was cleared of all five charges Friday, after killing two protesters and wounding a third in Kenosha, Wisconsin last year.

In Albuquerque, Bernalillo County District Attorney Raúl Torrez shared his thoughts about the verdict with KOB 4.

"Although I am disappointed in the outcome of this trial, we respect the jury’s verdict and I would echo the calls we have heard around the country for those who are disappointed that they express themselves peacefully," Torrez said.

Torrez said he is concerned about the message the Rittenhouse verdict sends to others.

"One of the things that is concerning to me is that individual who will look at this and think this kind of self-appointed vigilante activity is somehow acceptable," Torrez said. "It isn’t, and it’s something that we have to be mindful of." 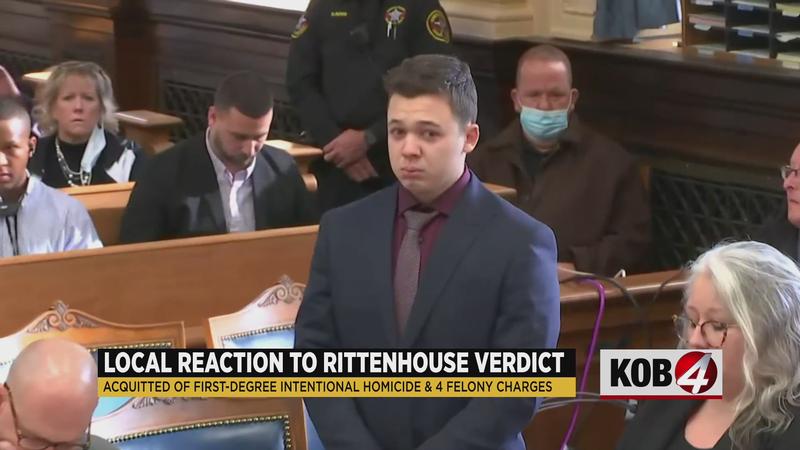 Armed milita groups have clashed with other protesters here in Albuquerque. Back in the summer of 2020, one protester was shot in Old Town. The suspected shooter, Steven Baca, was surrounded by the New Mexico Civil Guard at that protest – a group the district attorney has been trying to stop. Baca is awaiting trial.

"We are actively preparing the case for trial and will have an opportunity to present early next year," Torrez said.

Spencer Schacht: Are you worried the Rittenhouse case will impact the jury for the Baca case?

Raúl Torrez: There are certain similarities and would imagine some of the lame legal arguments will be made, certainly by the defense – but there are certain factual differences that will probably lead to different rulings by the court and different evidence presented to the jury.