ALBUQUERQUE, N.M. — On Wednesday, President Joe Biden declared that a major disaster exists in the State of New Mexico and ordered federal aid to supplement local recovery efforts in the areas affected by wildfires.

Gov. Michelle Lujan Grisham had requested the declaration Tuesday. Typically, these types of declarations are signed weeks after a fire is extinguished, but in this case it was signed less than 24 hours after the president received it.

"It’s the quickest turn around and it’s earlier than any other state," Lujan Grisham said.

The money will go directly toward those impacted by the wildfires in New Mexico. Including those who lost everything.

"We buy your livestock, we put the fences back, if we need to repair a structure we do. If we need to build your home again, they do," Lujan Grisham said. 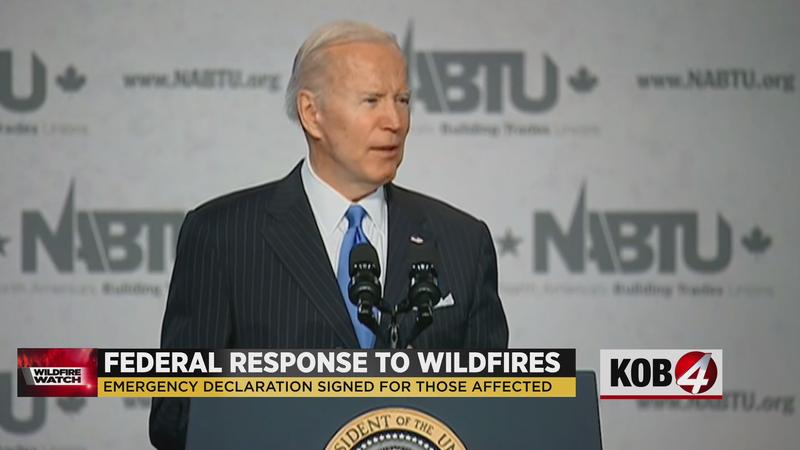 New Mexico’s federal legislators were also involved in this process – writing Biden a letter encouraging him to sign the declaration. U.S. Rep. Melanie Stansbury spoke with KOB shortly after it happened.

"The state is currently spending over two million dollars a day to fight these fires and so this will enable FEMA and the rest of the federal family to really send additional back up support and resources to fight the fires," said Stansbury.

“I thank President Biden for responding to our requests to swiftly approve the Major Disaster Declaration. I will continue to do everything possible to support the effort to fight the wildfires burning today, rebuild in the aftermath, and mitigate future devastation.”

Assistance can include grants for temporary housing and home repairs, low-cost loans to cover uninsured property losses, and other programs to help individuals and business owners recover from the effects of the disaster.

How to apply for assistance:

Residents and business owners who sustained losses in the designated counties can begin applying for assistance May 5 by registering online here or by calling 1-800-621-FEMA(3362) or 1-800-462-7585 (TTY) for the hearing and speech impaired. The toll-free telephone numbers will operate from 7 a.m. to 10 p.m. (local time) seven days a week until further notice.