Officials confirmed Tuesday at least one home and 18 other structures were damaged or destroyed in the fire. However, the cause of the fire is still unknown.

Crews made progress to regain the primary and secondary containment lines overnight but around 200 structures remain threatened as the fire is still 0% contained. Helicopters were also able to lift off and begin firefighting efforts.

The Bureau of Land Management has taken command of the fire as it rages on both sides of the Rio Grande. More than 100 people have been assigned to the fire and resources from throughout the state – including Bernalillo County and Albuquerque fire crews.

A firefighter sustained minor injuries while responding to the fire but they are recovering at home. 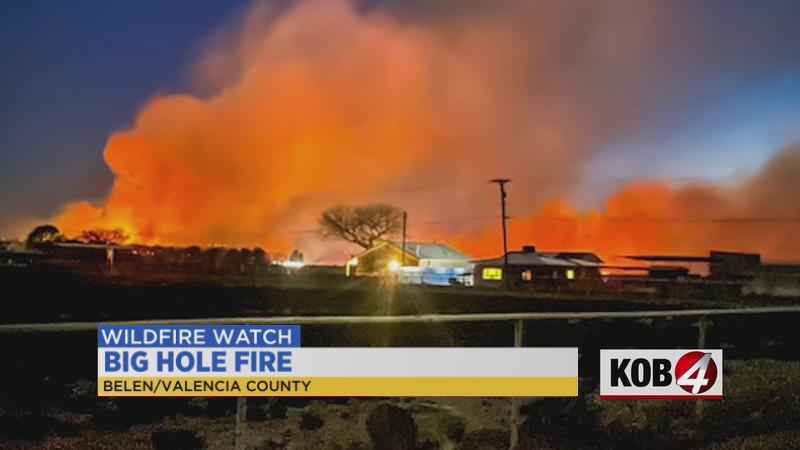 A 20-person ‘Geronimo Hotshots’ crew has arrived from Phoenix in order to assist.

New Mexico Highway 47 and Gabaldon Road have reopened in Belen, for now. As of Wednesday morning, there are no areas being evacuated but people are encouraged to avoid the area and be prepared to evacuate if their area is impacted.

A nursing home was voluntarily evacuated Monday to the Belen Recreation Center due to concerns over respiratory issues. Residents in the areas of Blue Sky Road, Las Chapulinas and Nighthawk Road were also encouraged to evacuate to the recreation center.

Any animals that crews pick up will be held with the Valencia County Sheriff’s Posse until their respective owners claim them. Those in need of assistance are encouraged to contact Liz Marquez at 505-803-7373.

Red flag warnings and wind alerts are posted statewide as conditions will remain warm, windy and dry. Gusts between 50 and 65 MPH will be common and the strongest winds will arrive with a cold front, causing blowing dust and reduced visibility.

Officials are warning people not to burn any weeds or trash – and to avoid welding or grinding – until red flag conditions lift.