Supporters say it means jobs. But in a nod to the popular Netflix movie, the measure’s sponsor calls it the "Don’t Look Up" bill.

"That movie when we had an opportunity to shoot a missile, at an asteroid and try to get it off course. We’ve got a fast-moving application with the Nuclear Regulatory Commission," said Sen. Jeff Steinborn.

Steinborn says Senate Bill 54 is the best chance to knock off course a proposed high-level nuclear waste storage facility near Hobbs and Carlsbad.

"Nuclear waste is not infallible. Accidents are inevitable. It’s not a matter of if, it’s a matter of when. And I don’t think New Mexico wants to find out the answer to that when,"

The facility would be different than the Waste Isolation Pilot Plant near Carlsbad. It would handle higher-level nuclear waste from across the country, such as spent uranium fuel rods. Instead of deep underground storage, it would be in special containers that are partially below ground and partially above.

Steinborn’s bill is based on a Texas ban, and would prevent local or state governments from issuing or certifying permits for high-level waste.

"This is more than just a local issue. The U.S. does not have a permanent site selected for high-level nuclear waste, and some are worried that if the state opens the door a crack, it’ll get kicked open all the way," Stein born said.

State Sen. David Gallegos says a proposed 40-year permit for the facility would prevent that.

Gallegos lives in Eunice, where he says the same alarms were sounded before a uranium enrichment facility opened in 2008.

"You know if you look back at that time, they said ‘No, no, no, no.’ We see the investment in New Mexico and we’ve seen the outcome of what it’s done for Lea and Eddy counties or for our state," said Gallegos.

And, he says, it’s in the company’s best interest to operate safely.

"I would anticipate they’d have really knowledgeable people on site because they have a liability not just to New Mexico, not just to Lea and Eddy county, but to our nation."

An argument Steinborn doesn’t buy in the face of what he says is unproven storage technology.

"We don’t deserve to be the guinea pig. New Mexico’s done enough for the country."

Track SB 54 during the legislative session. 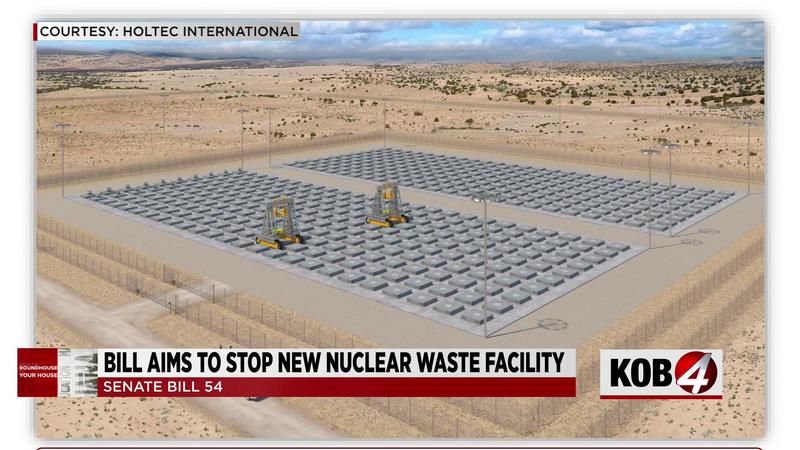