‘Bishop of the barrio’ being considered for sainthood

ALBUQUERQUE, N.M. – As we celebrate Thanksgiving this week, the story of a man known as the “Bishop of the Barrio” reminds us that we are all important.

Alphonse Gallegos, who was born in Barelas, is being considered for the Roman Catholic’s Church highest honor – sainthood. If the Vatican declares Gallegos a saint, he would be the first New Mexican with such a distinction.

“When you hear of a possible saint coming out of Barelas, that’s huge!” said Deacon Robert Vigil of Sacred Heart Catholic Church in Albuquerque.

Gallegos was born into a large family in 1931. The font used for baptism still stands at Sacred Heart Catholic Church.

“He received his first couple sacraments here before his family moved him to California,” Deacon Vigil said.

Gallegos’s life started with struggle. He was near blind in one eye. His family moved him to the Los Angeles area when he was a child, in hopes there would be more help for him there. It was that disability that almost kept him out of the priesthood. Some seminaries did not accept him.

“In our faith, when we read about saints, we know they struggled,” Deacon Vigil said. “But they are saints because they never gave up their faith.”

Determined to be a priest, Gallegos was finally ordained in 1958. Immediately, Father Gallegos began a ministry focusing on the poorest in the community and lobbying community leaders to help bring educational opportunities to the barrios of Los Angeles. Pope John Paul II noticed his work and made Gallegos a bishop in the Sacramento area.

“Once he was appointed Bishop, he did not change,” said Father Eliseo Gonzales Jr., the Vice Postulator to Bishop Gallegos’s Canonization Cause. “He continued to do what he had always done; visiting the people in their homes, walking the streets of Sacramento, visiting young people in the parks, reaching out to the homeless and to the migrants.”

Bishop Gallegos marched with Cesar Chavez and fought for the rights and working conditions of farm workers. According to Father Gonzalez Jr., Bishop Gallegos spent time with the migrant workers, living with them and experiencing firsthand their struggles.

Bishop Gallegos was known to find lowrider clubs as a way to get through to young Latinos. He blessed their cars and encouraged to get to mass and stay in school. He embedded in Mexican immigrant communities, working to help create new opportunities for people who were facing decimation and racism. Giving hope to the hopeless and fighting for the underdog, was part of Bishop Gallegos’s service.

“Pope Francis tells us, ‘you have to smell like the sheep,’” said Deacon Vigil. “In other words you need to be in the community. The real ministry and putting our faith into action is to take it out into the community. That’s the gift this man had.”

Bishop Gallegos died in 1991. As the story goes, the Bishop’s car had a mechanical issue on an interstate. The Bishop’s driver offered to push the car while Gallegos steered the vehicle into a safe area away from moving traffic. But the Bishop insisted he push the car and his driver steer. A driver hit them, killing Bishop Gallegos; the driver survived.

After his death, people came forward with stories about Bishop Gallegos that may amount to miracles. The stories include Bishop Gallegos curing blindness and diseases. One of the more remarkable stories comes from Aldo Nunez. Gallegos was his childhood priest. Nunez was given a sudden, terminal leukemia diagnosis with just hours to live. With death at his doorstep, Nunez began praying to Bishop Gallegos.

Gallegos received a short stint of chemotherapy as he continued his devotional prayers. To the doctors’ surprise—the leukemia vanished.

In 2006, the Vatican launched an investigation into the stories surrounding these possible miracles. And in April 2016, Pope Francis names him a venerable, the first stage leading to sainthood. After three of these stories are investigated and can’t be explained by modern science or medicine, they are declared miracles and the Pope can declare sainthood; the highest honor in the Catholic Church.

As the Bishop of the Barrio is on his way to becoming New Mexico’s first saint, his story reminds us that it doesn’t matter whether we are faithful or not, we all have a responsibility to be kind and gracious to those around us, especially to those with less. 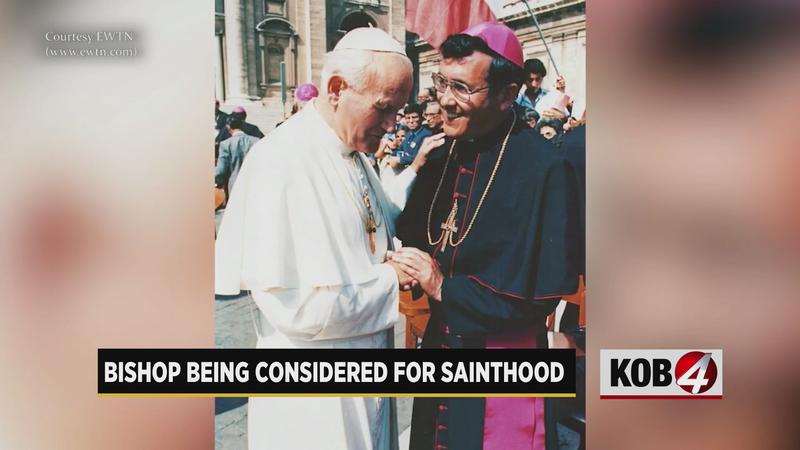