ESPAÑOLA, N.M. – The first baby box in New Mexico is now operational. A blessing ceremony was held in Española Wednesday afternoon for the new device.

“So it’s anonymous, the mother doesn’t have to bring the baby and hand it to a firefighter, she can actually use this device and walk away and not be seen,” said Wickersham.

The governor and state lawmakers also announced they set aside $330,000 during the legislative session to get one baby box in each of New Mexico’s 33 counties.

“This brings Española to be the first to have a baby box in the state of New Mexico we’re really excited, we’re really proud,” said Sanchez.

Support grew after an 18-year-old mother in Hobbs was caught on camera throwing her newborn in a dumpster last month. The baby survived after dumpster divers found him six hours later.

“We have a Safe haven Law that we’ve had for a long time, that recognizes these issues occur and there are many safe places for a woman or family to have access to in order not to have an abandonment that causes real risk and far too often tragedies for that mother father and that infant,” said Gov. Michelle Lujan Grisham.

And soon there could be more baby boxes around the state.

During the ceremony, the governor and state lawmakers — both Republicans and Democrats announced they set aside $330,000 during the legislative session to install one baby box in each of New Mexico’s 33 counties.

“We are going to have one third of all the baby boxes in the United States right here in New Mexico,” said Lujan Grisham.

With the one in Español there are now 103 of these baby boxes nationwide. So far, 15 babies have been left inside one. 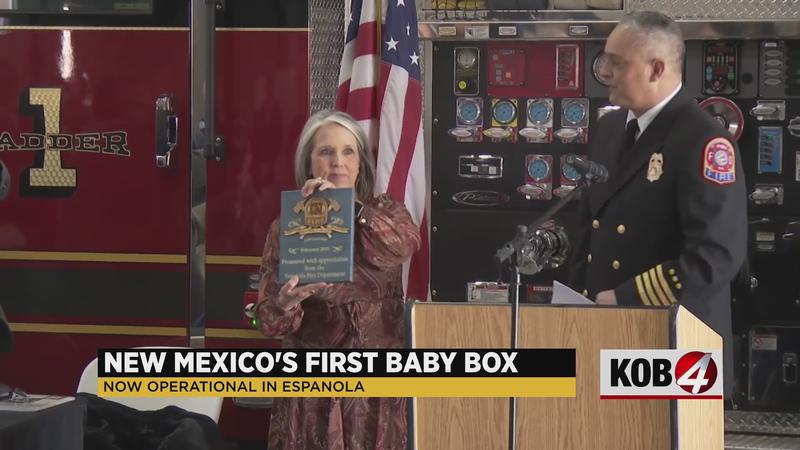