BELEN, N.M. — Evacuations are in progress in the area of Blue Sky Road, Las Chapulinas and Nighthawk Road, according to the Valencia County Fire Department.

Officials are urging residents in that immediate area to report to the Belen Recreation Center at 205 Eagle Lane.

The fire is reportedly burning on both sides of the Rio Grande north of River Road. It is currently estimated at 60 acres and is 0% contained.

"Unfortunately, we have seen structures that have been damaged or lost on both sides of the river. I cannot give you a number at this time because we are not able to get our crews into those areas to verify that," said Valencia County Fire Chief Matthew Propp.

The Valencia County Fire Department and multiple agencies are responding to the bosque north of Rio Communities. 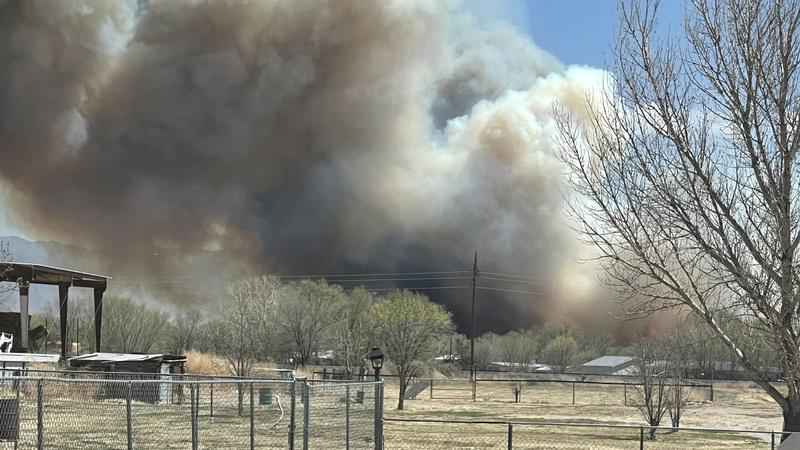 Fire in Belen off of Gabaldon Road[Sha Hicks ]

Fire officials say it’s been moving super quickly – a quarter mile at a time – and the wind is making it even more difficult to handle.

"We’ve literally been chasing fires the majority of the afternoon, and unfortunately, we’ve had a lot of those spot fires hit right next to structures," said Propp.

Multiple agencies swarmed the area in the early afternoon to help. Crews are fighting this fire from the ground and the air – seemingly nonstop.

"They’re tired. It’s been a long day. But they see what needs to be done. They’re working as hard as they can, you know, for a while there, against what seemed like unwinnable odds," Propp said.

And that description may be in-play again Tuesday, because fire officials say, when the temperatures skyrocket, so will the fire danger. They’re worried about the big hole fire will start to spread again, and they think they’ll be battling it for at least the next two or three days.

There is a lot of farmland in the burn area. On the Valencia County Community Watch Facebook group, people are posting their phone numbers offering help in regard to evacuating livestock.

The bosque fire in Valencia Co. is now called the "Big Hole Fire." So far, structures have been burned and evacuations continue in the area. Red Flag Fire conditions continue statewide! pic.twitter.com/CdCCeJiAkI