ALBUQUERQUE, N.M. — Multiple businesses in the metro are cleaning up the damage left behind after they were broken into early Monday morning.

Both Quarter Celtic Brew Pub and Nibbles Exotic were broken into just before 5 a.m. Monday morning and both owners say they believe these break-ins were completely random, but unfortunately, they say this isn’t the first time they’ve had to clean up after a break-in.

“it’s just a pit in your stomach because any time the cops call that early in the morning it’s never good news,” Quarter Celtic owner Rory McKeown said. “Just in the drive down you are hoping it’s not as bad as it could be, then we got here and it was just as bad as we didn’t want it to be.”

Glass covered the floor as McKeown arrived at his business. APD had the suspect, Daniel Amadeo Jaramillo, in custody but the damage had already been done, and they had to stay closed all day just to clean up.

“They threw a boulder through the brew glass and came down ended up breaking almost every glass we had in the place it was almost like walking on snow through here every computer smashed everything was cut too,” McKeown said. 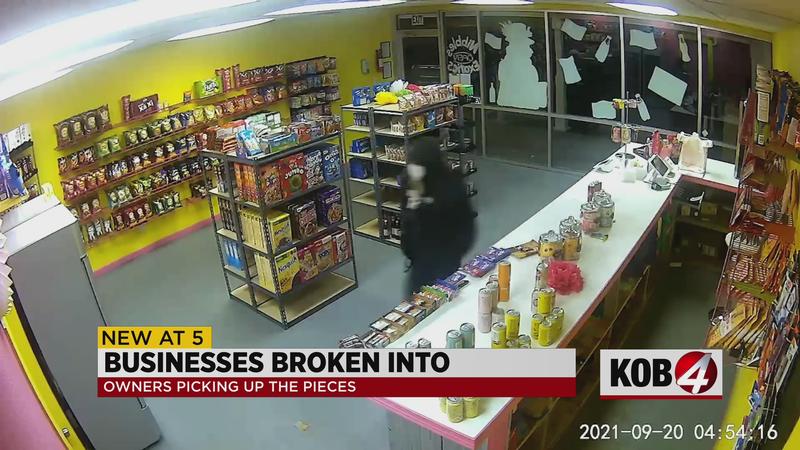 Around the same time Nibbles Exotic owner Cesar Perez got a notification on his phone from his security camera. When he watched the video he saw a man kicking down his office door.

“He came in he cut off the lock came into the back and kicked it he took a backpack we had back there,” Nibbles Exotic owner Cesar Perez said.

Days later, he’s left cleaning up the mess. Replacing the lock on his front door and installing a whole new door to his office.

“There was more damage than anything that is pretty much it,” Perez said.

Nibbles exotic opened back in July and this is the second time his business has been hit – still no leads as to who broke in.

“Honestly it is pretty discouraging but moving forward for me at least now I’m thinking of everything I can’t leave anything I just can’t be comfortable leaving stuff here,” Perez said.

Perez said the thief took a backpack, some money in the back, and some other inventory. Over at Quarter Celtic while the burglar didn’t get away they are still left with a large bill. McKeown said they are still calculating the cost of repairs but so far they are well over $5,000.

“It hasn’t been a good two years you just keep bouncing back so when something like this happens you are just like ahhh, come on,” McKeown said.

Both businesses were able to open back up today but they both said vandalism in that part of town seems to be more common, and APD confirmed they have responded to more business break-ins and burglaries this year.