ALBUQUERQUE, N.M. — April 1 is coming up fast – that is when sales of recreational pot will be legal in New Mexico. It’s the same time a local dispensary plans on opening up in Belen.

There’s just one problem, some businesses and other locals are not on board.

The problem is where the dispensary will be located. Smokal is planning on opening up at 212 Becker Avenue in the Historic Arts District.

Some business owners out there don’t believe a dispensary fits that bill. There’s a petition circulating with about 70 signatures.

It’s made up of some business owners, residents and some patrons. But the dispensary owner said he’s done everything by the book. He believes it will only help the area. 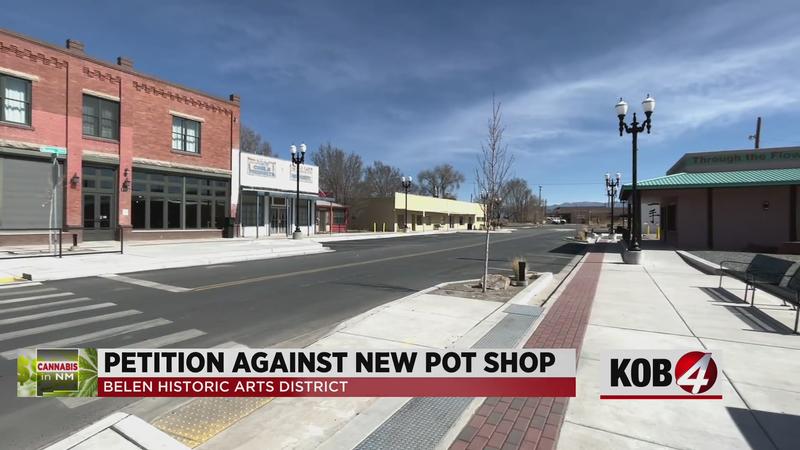 There are not many businesses situated on that stretch yet, but it was the grand vision that brought Barbara and Robert Jaramillo to the Historic Arts District in Belen.

“We thought, let’s go there and try it out, and maybe it will add some value to the street on this side of the street,” said Barbara Jaramillo, co-owner of Jaramillo Vineyards.

The Jaramillo Vineyards tasting room is right across from Judy Chicago’s Through the Flower art gallery.

There are bigger plans in the works to attract more artists.

The Jaramillo’s are just two of more than 60 others who don’t see how a marijuana dispensary fits into that picture. They have more than a few concerns with extended hours, a different clientele, and an unknown impact.

“I think without having at least a reasonable discussion we’re just shooting in the dark and we’re just going to have to deal with whatever issues come up after the fact,” said Robert Jaramillo.

But Jay Peters, one of the owners of Smokal and building owner, said they’re not shooting in the dark. He said there has been an extensive conversation.

He said it’s taken about a year to get to this point, with a city permit in hand.

“I assure you we’ve been through all of them. Like I said. We’ve got our license in our hand, it took a lot. We worked hard,” said Peters.

City Manager of Belen Andrew Salas said there are about eight steps to get one of those permits:

He said Smokal has checked all of those boxes, further expanding on the 300 feet requirement, a concern of some in opposition.

“The 300-foot perimeter is the first step in the process," Salas said. "This is ascertained by our GIS Asset Control Tech who generates a map to identify whether or not the 300ft buffer zone to Schools and Licensed Day Cares is satisfied. This is measured from point of sale of the establishment (center).”

The business is still waiting for the state license they’ll need before opening.

KOB 4 asked the city manager if there were any public hearings on this. Salas said they do not need them because the dispensary is not a consumption lounge.

The business will only sell cannabis, meaning those who buy would have to use elsewhere.

Meanwhile, those in opposition do plan on bringing this petition up at the next zoning meeting.