SANTA FE, N.M. – The Calf Canyon and Hermits Peak fire is currently the largest fire burning in the country. The fire surpassed 100,000 acres overnight, and the incident commander says the fire could end up doubling in size.

The fire pushed to the east and south, threatening small communities like Mineral Hill and Hot Springs, and with this growth more evacuations and closures have been put in place.

All of Mora is now under mandatory evacuations, those leaving must take Highways 433, 442 or 518 north to Taos. Those roads will be open for evacuation only and no re-entry will be allowed.

The Santa Fe National Forest has closed the entire Pecos and Las Vegas Ranger District to the public—this area includes all land, roads and trails in the ranger district around Las Vegas.

Anyone caught in closed areas could face a $5,000 fine and six months in jail.

As the fire continues to spread to the south, one thing fire crews are working to protect is the watershed and houses just west of Las Vegas.

"Crews continue to work up 65 to protect those values that have been impacted by fire or could be impacted by fire they are using firing operations putting fire on the ground to keep fire from impacting those values at risk working on keeping all the pumps all the hose lays are taken care of along this whole corridor,” said Todd Able operations section chief.

Nearly 1,000 firefighters are battling the flames. Folks in nearby Las Vegas are on edge, waiting to see if they’re next.

“We are pretty much ready to go when we are told,” said Ivan Gold.

Ivan Gold says his grandpa Louie has lived in the same house since the 70s and has been coming here his whole life.

“I was a little boy and grandpa’s was where we came for Christmas and all the holidays, the Easter egg hunts were done here, so there are lots of memories here,” said Gold.

But now the evacuation line is drawn at the end of his driveway.

“We felt OK but a couple of days ago it got really scary and it was coming down and I think the report was 30,000 acres in a day. You could see a lot of smoke and flames from the front porch, so that was big scare for us,” Gold said.

Some of their neighbors were already told to evacuate once.

“We were told to evacuate two nights ago and my girlfriend and two neighbors stayed here in order to protect the property,” said Steve Martinez.

Martinez said he’s lived here his whole life and never thought he would have to do something like this.

“Never. Never. I’ve lived in Las Vegas near 70 years, seen a lot of fires, but nothing like this,” said Martinez.

Even as the evacuation line creeps closer to their front door, the whole neighborhood is preparing and hoping they won’t have to.

“Hopefully it won’t happen what they are saying what’s going to happen praying for God to help us,” said Louie.

As of now there are no evacuation orders for the City of Las Vegas but with most roads headed to the west or even to the north being blocked off, these neighbors are ready to go in a moment’s notice. 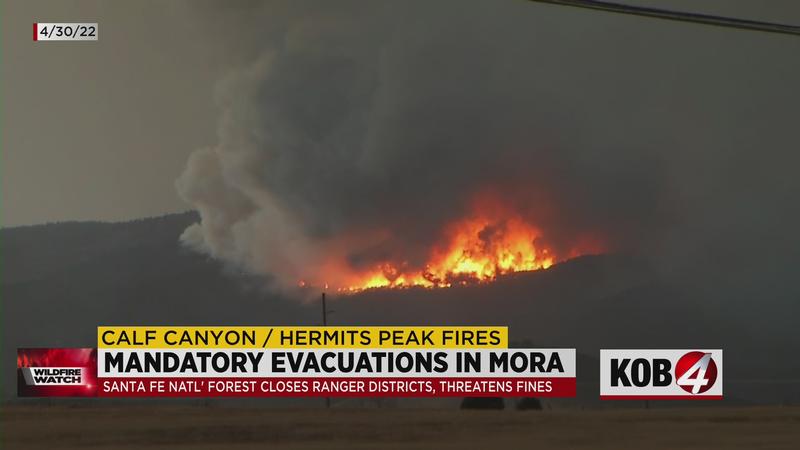