SANTA FE, N.M. — Mandatory evacuations have been ordered for the Calf Canyon Fire, east of Santa Fe near Gallinas Canyon.

The National Weather Service Albuquerque issued a rare fire warning Friday. Officials said the Calf Canyon Fire is currently north of Rociada and the Pendaries Village. The fire is expected to reach the State Route 94 corridor, south of Ledoux and north of Sapello, by 8 p.m. Friday. Then the fire is expected to reach State Route 518 corridor near Buena Vista by midnight.

The cause of the fire is still under investigation. It is 0% contained.

Highlights: The National Weather Service has issued a fire warning. The public is encouraged to stay vigilant on evacuation status through the San Miguel County Sheriff’s Office and be prepared to leave in a rapid manner. Due to extremely high winds, powerlines and trees may block egress in many areas. Roads will likely become congested with traffic leaving the area, and smoke will make it difficult to see. Use extreme caution on the roads. The new fire information line is 505-356-2636. 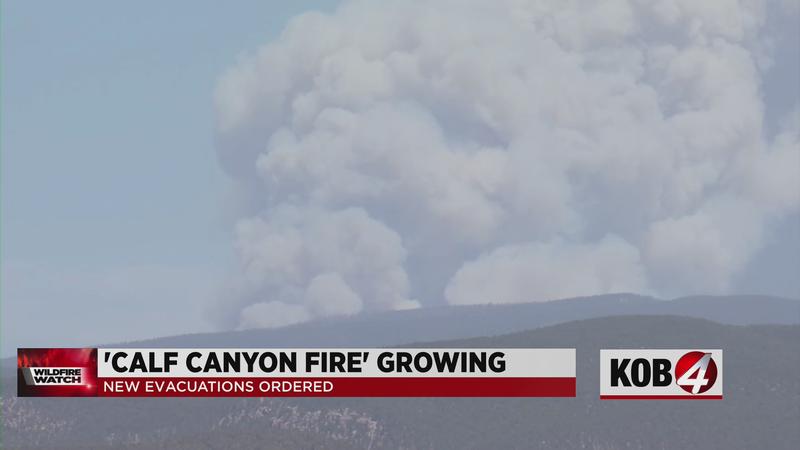 Evacuations: The San Miguel County Sheriff’s Office has issued mandatory Go evacuations as of 8 a.m. Friday. Due to the severity of the conditions, everyone in the area should be prepared to evacuate. Evacuations have been ordered for Big Pine, Chavez, Lone Pine Mesa, San Ignacio, Pendaries Village, Rociada, Canoncito, La Canada, East Las Tusas, West Las Tusas, and all nearby communities.

Evacuation centers have been established at the former Memorial Middle School at 947 Old National Road off Legion Drive in Las Vegas, at the Raton Convention Center, and at the Penasco High School gym.

Restrictions: The Santa Fe National Forest has issued a closure order to protect public health and safety during fire operations on the Calf Canyon Fire. The full closure order and map are available here.

Smoke: Smoke impacts in the area will occur in the late evening hours due to wind changes from the west. High winds and blowing dust will cause reduced visibility on roads. Areas north of the fire will see smoke increasing later in the day. Moderate to Unhealthy to Sensitive Groups conditions will continue. Smoke-sensitive individuals and people with respiratory problems or heart disease are encouraged to take precautionary measures.

Mandatory evacuations are in effect for several communities. @KOB4 pic.twitter.com/9QEVjtbnE3

An emergency evacuation shelter for victims of the Calf Canyon, Hermits Peak and Cooks Peak Fires is open at the Old Memorial Middle School in Las Vegas.

Red Cross volunteers say there is space for up to 400 people pic.twitter.com/6lBkwbUVb3