The Southern Area Red Team, a Type 1 Incident Management Team, arrived to assume command of the fire Sunday morning. On Saturday, officials said several homes were destroyed by the fire.

The fire is close to the fire footprint from the 2011 Las Conchas Fire, the 2013 Thompson Ridge Fire and the 2017 Cajete Fire. The current fire footprint includes forest units that have previously been treated to reduce fire hazard.

The Sierra de Los Pinos and Cochiti Mesa communities remain evacuated. There haven’t been any reports of injuries or the cause of the fire.

Officials said the fire is 4,903 acres with 0% containment. 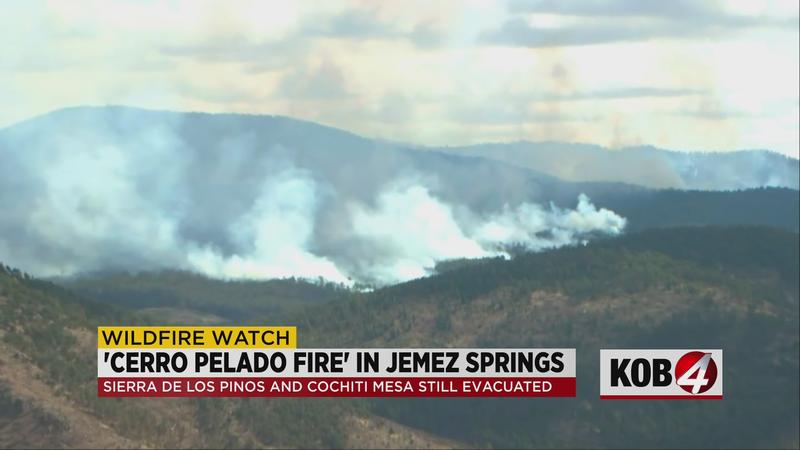 "Everybody else has not started their fire season, so this is probably the prime place to be for fire fighting right now," said Peter Myers, operations chief.

Myers is helping to lead a Type 1, east coast team of about 80 people. They took over just one day after the fire broke out near Jemez Springs.

"Our team usually goes out two, three times a year, comes out west to help them out on fires but this time of year, yes it’s very unusual," said Myers.

But he says there are a few things working in the team’s favor right now. First of all, lower temperatures, paired with higher humidity.

"That’s gonna calm the fire down a lot in this fuel type, where it’s burning at this time," Myers said.

Second, multiple burn scars on the east and north sides of the fire.

"Those old fire footprints, there’s no canopy so there’s no trees to let that fire carry on. It’s just grass and large wooded debris on the ground, so the fire kinda sets down in them areas, it still crosses them, but it’s a lower intense fire than the main fire was doing."

The Valles Caldera National Preserve, north of the fire, will be closed until further notice. NM Highway 126 and portions of NM Highway 4 are also closed. Authorities are also asking people to say clear of Jemez Spring.

COMMUNITY MEETING: A public meeting about the Cerro Pelado Fire will be held tonight from 5:30 to 6:30 p.m. at the Jemez Mountain Baptist Church, 6 Riverview Court, Jemez Springs, New Mexico. Members of the Southern Area Red Team and agency representatives will discuss and answer questions about current progress and planned activities for the fire. For those unable to attend, a video will be posted to the above-stated Cerro Pelado Facebook page.

Evacuations: The Sierra de Los Pinos and Cochiti Mesa communities remain evacuated. The evacuation point for residents in Jemez Springs is the Jemez Mountain Baptist Church located at 6 Riverview Ct, Jemez Springs, NM 87025. For any residents in this area that need to get their livestock to safety, they can be brought to Expo New Mexico at 300 San Pedro Dr. NE, Albuquerque, NM 87108.

Resources: Firefighters from the Jemez Ranger District and Sandoval County as well as local volunteer fire departments are on scene.

Fuels: The Cerro Pelado Fire is burning in ponderosa pine and mixed conifer. Conditions on the forest are extremely dry with high fire danger and abundantly available fuels.

Stay with KOB Eyewitness News 4 and KOB.com for updates.