ALBUQUERQUE, N.M. – Taylor Bennett thought she was just heading to dinner with her family at Jersey Mike’s but it turned out to be so much more than that for the 12-year-old girl.

It started out like any other time where they waited in line, ordered some sandwiches and sat down to eat.

Then it quickly took a turn.

"Hey everyone is there a Taylor in the building? Taylor?" asked an employee on a microphone in the middle of the dining room.

"I think we forgot a special ingredient," he said. 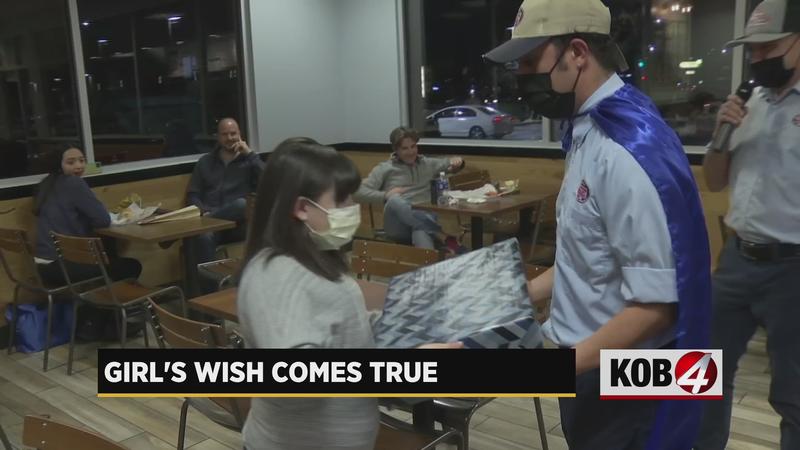 Behind him was another employee in a cape, with several wrapped boxes and bags. It appeared Christmas had come early for Taylor.

"The clothes that I wanted oh my gosh!" Taylor said. She quickly caught on.

"Oh my gosh, oh my gosh, this is for the make a wish! Oh my gosh, how did you know about this?"

Taylor Bennett has been waiting for her wish day for a year-and-a-half. However, her battle with lupus has been going on since she was nine years old.

Lupus is an inflammatory disease caused by the immense system attacking its own tissues. In Taylor’s case, it attacked her kidneys, blood and joints. She even had a stroke right before her 10th birthday and spent three months in the hospital.

"After her stroke they didn’t she was even going to walk again," said her mom, Crystal, "so just being here like this is miracle enough."