ALBUQUERQUE, N.M – Driving around Albuquerque you may notice some neighborhoods are brighter, and no it’s not the luminarias and Christmas lights, the city has installed over 500 new street lights in some historically dark neighborhoods

Neighbors in the International District, the Southwest Mesa, and Wells Park say these new lights make a difference not only for visibility but for their safety as well, but they add 500 isn’t enough.

“We need more lights it dark and it’s not a good neighborhood, there’s lots of crime here,” Ted Stalborn explained as KOB 4 talked to him on his evening walk along Trumbull Avenue just off Louisiana Boulevard.

Stalborn has lived in the International District for over six years. He says while he appreciates the new lights along some of the streets in his neighborhood, like Trumbull and Southern, there are still plenty of dark areas.

KOB 4 asked, “are there any streets that stick out to you that you wouldn’t walk at night?” His answer?

“Well Grove Street and Charleston are probably the worst, I don’t go on Pennsylvania at night either,” Stalborn said.

So, KOB 4 drove down those streets and sure enough, they were dark, streetlamps only at the intersections leaving long blocks in the dark.

But on other streets, like Southern, the city of Albuquerque’s Department of Municipal Development has installed new LED lights. In total, the city has spent over $5 million adding more than 500 lights across the metro.

"These lighting improvements are part of the city’s efforts to invest in historically disinvested neighborhoods and improve safety for everyone using the road," DMD Director Pat Montoya said.

Driving in these neighborhoods, you can see the difference. The new lights are lower and brighter, many point towards the sidewalk rather than just the road. But there are some stretches of road like 12th street where the new lights just end. North of Lomas, 12th Street is bright but south of Lomas, in the Historic Downtown Neighborhood, 12th Street only has lights at the intersections.

“The more they get, the better cause these streets are pretty dark,” Stalborn said.

Stalborn and his neighbors just might get their wish. DMD says the city isn’t done yet.

In the new year, 300 more lights will be installed by spring. And these new lights use a combination of utility and solar power. 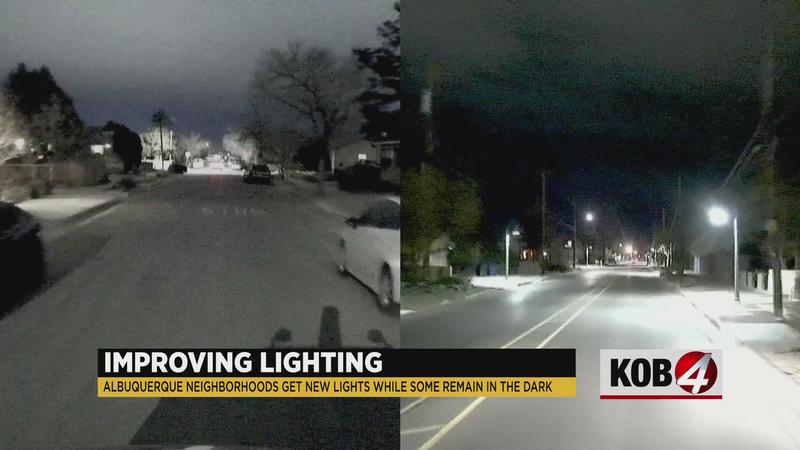