ALBUQUERQUE, N.M. – The Albuquerque City Council voted Monday evening 7-2 to place a bond question for the new stadium on the ballot in November.

“The discussion tonight went a long way towards myth busting some of the unfortunate untruths and misconceptions that have risen up regarding the stadium bond proposal. Whether it’s going to see a United home game, a high school tournament, or our favorite artists fill an arena, we believe an Albuquerque multi-use stadium will be an asset that New Mexico can be proud of, creating opportunities for affordable family fun for decades to come,” said Mayor Tim Keller. “Now it’s up to the voters. We look forward to continuing to have productive conversations with the public about the bond proposal, protecting historic neighborhoods, and ensuring that, like Isotopes Park, families across the city benefit from the project.”

The stadium will be a publicly-owned facility, but the contract details are still up in the air.

Some city councilors were in full support.

“I think this is a good deal for our city and that we ought to let voters participate,” said Pat Davis, city councilor.

Others members were hesitant.

The two dissenting votes were from Jones and Brook Bassan. 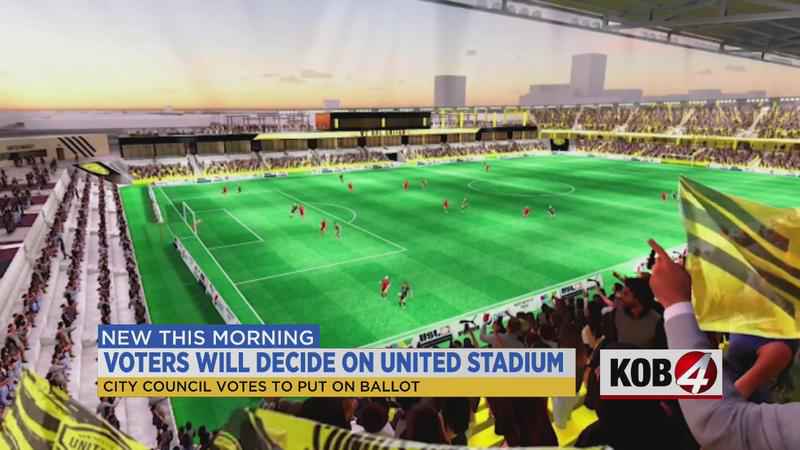 Most of the comments submitted in August were in opposition to the stadium but many people spoke Monday night in favor of the project.

“It will bring us together and continue adding to the beautiful fabric of this city,” said meeting attendee.

During the city council meeting, the construction company hired to do the stadium’s feasibility study said construction would start seven to nine months after the November vote.

The City Council also approved a $30,000 arroyo safety study. The study is aimed at keeping people away from arroyos during bad weather, including a possible siren warning system.

Another item about free bus fare for the year was tabled for a future meeting. An item saying the city would look into possible stadium locations on the West Side failed 3-to-6.