LAS VEGAS, N.M. – While many homes are far from the roaring flames in northern New Mexico, many in Las Vegas are concerned about their water.

The combined Calf Canyon and Hermit’s Peak fire is inching closer toward the town’s reservoirs and water treatment plant.

"It’s always been a concern, because our reservoirs are located in the woods," said Mayor Louie Trujillo.

Adding that the fire is a couple mountain ridges away, but it’s close. At this point, part of the fire hit one of the reservoirs.

"There has been small spot fires within the reservoirs that are crawling fires, burning mostly ground fuel," Trujillo said. "There was a small portion that burned higher up in the Gallinas canyon that we’re going to have to worry about and of course constantly we are worried that this fire will grow into those canyons that would cause to eventually have an emergency on our hands."

Despite the more than 145,000 scorched acres, Trujillo says Las Vegas is in good shape for now.

"At this particular time there is no threat to our water," said Trujillo.

Fire crews are getting their water from nearby sources that won’t impact the town’s supply, the mayor says. He is also encouraging folks to conserve their water at this time.

"In some cases, people have left their property and they’ve left the sprinklers on,” Trujillo said. “What’s happening is if we do not find people at home and their sprinklers are going on all the time, we will probably stop the water flow."

If the worst case scenario happens, with the fire directly hitting their water supply, they are prepared.

"In the event of a bad fire in the reservoir area or the treatment plant area, we would have to shut down operations. We have a three-day supply, emergency supply. In the even this happens," said Trujillo.

The mayor said that Las Vegas officials met with the state and about 27 agencies to discuss reparations and plans to make sure the water is safe after the fires are extinguished.

According to Shelly Lemon, Chief of the Surface Water Quality Bureau with the New Mexico Environment Department, within two years of any major wildfire NMED will use funds from the Clean Water Act to develop a post-fire response plan and money to reduce sedimentation and protect aquatic habitats impacted.

NMED will also assess damages to the watershed and implement longer-term restoration plans. 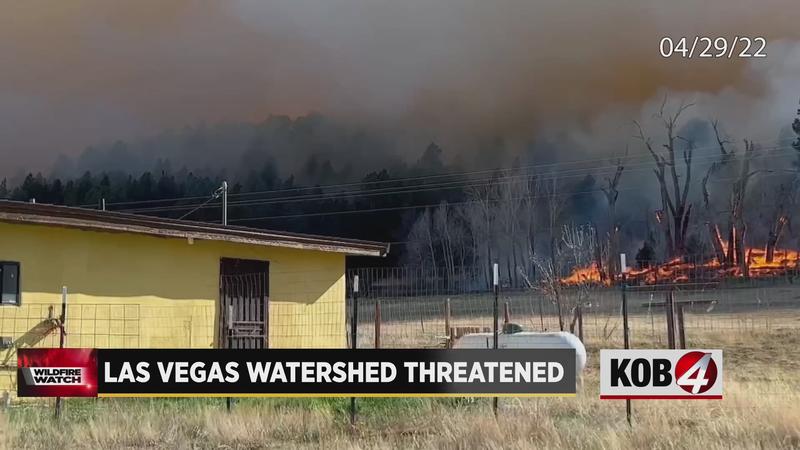