ROSWELL, N.M. — It was a sendoff worthy of a life of service featuring cheeseburgers, cookies and hugs, as people on Wednesday flocked to the lawn of the Chaves County courthouse to say farewell to one of New Mexico’s court facility dogs.

Those who worked with Lincoln over the years, including the Office of the District Attorney for New Mexico’s 5th Judicial District, as well as officers from the Roswell Police Department and members of CASA came out to say goodbye to the black lab, just before he was set to be euthanized that day.

“We’re just here to celebrate what he did for us and we just want to let him know that we love him and he’s very appreciated,” said Gina Yeager, a victim’s advocate for the district attorney’s office for New Mexico’s 5th Judicial District, and who is now Lincoln’s handler.

She has spent years working with Lincoln, who she estimates is close to 15, or 105 in dog years. And that old age has brought with it diminished health for the friendly canine and retired court facility dog.

Yeager, who has kept Lincoln as a house dog since he was retired a few years ago, said his list of aliments include intermittent hearing, pain in his teeth and throughout his body and loss of just about all his vision. 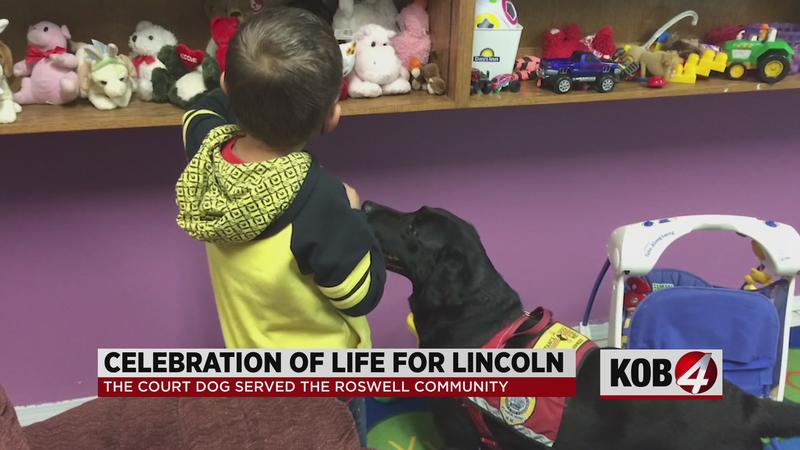 About two weeks ago, Yeager euthanize him after noticing how much pain he was in.

In his capacity as a court facility dog, Lincoln was used by the district attorney’s office to provide a comfort to witnesses and victims of crime. His infectious energy and personality brought relief to those experiencing fear, emotional distress and upheaval.

As one of the state’s first court facility dogs, Yeager said Lincoln leaves quite a legacy. And his influence was felt beyond Chaves, Eddy and Lea counties, which make up the 5th Judicial District.

“He’s worked with a lot of people throughout the state and he’s brought a lot of joy to everybody who meets him,” she said.

During his time of service, Lincoln was often also used by social service agencies.

Isabel Barrientos, worked with Lincoln at the New Mexico Children, Youth and Families Department, said he was often was used to comfort children taken from homes.

“Whenever I would bring children to the office after doing a removal, children would be crying, they would be upset. I would bring Lincoln into the visitation room to see them and they would just immediately forget about those bad moments and that helped me get through my job,” she said.

Barrientos said like many, she is sad to know that Lincoln will be gone, but glad that he will be spared further pain.