FARMINGTON, N.M. – A Salvation Army van and $6,000 worth of toys was stolen at a Walmart in Farmington last week. Those toys were meant for children in need in the community – part of the Salvation Army’s “Angel Tree Program.”

After hearing the news, some PNM employees started to shop.

“So, in total, 546 items were bought, totaling $5,000. Those gifts were bikes, toys and clothing – all so that the Salvation Army of Farmington could give out to hundreds of kids,” said Sara Yingling, PNM spokesperson.

With carts full of toys and other items, the generosity did not stop there.

“We caught the attention of a private citizen and they were so interested and so impressed with what we did that when we were cashing out, they actually gave us a hundred dollars towards our big purchase," said Angel Velazquez, senior safety consultant at PNM. "You know, totally anonymous but it was just amazing. We also caught other organizations at the Walmart getting stuff for the Salvation Army."

Kids Corner, a child care center in Farmington, was one of the other organizations at Walmart shopping for the same cause.

“Our main goal is to make sure that kids are happy, healthy and safe," said Nicole Deney, Kids Corner director. "And to know that some children were gonna go without this Christmas… we just couldn’t fathom the idea. So the owners gave me a call, they said, ‘load up the vans and replenish.’"

So Kids Corner also donated about $5,000 worth of toys and clothing ahead of Monday’s distribution day.

“What was nice about this distribution is that we probably had more toys than we ever could have imagined," Deney said. "So we were able to give these kids not only what they wanted, but maybe a little more than that. And because of that, we even have some toys leftover so people that were on our waiting list or Johnny-come-latelys, we are able to take care of them too."

With thousands of toys and clothing items and about $30,000 additional dollars of donations, the Salvation Army was able to serve about 600 children this Christmas.

The stolen minivan was also found in Sandoval County, but the toys inside were gone. Police are now looking for 37-year-old Anthony Crespin.

“We know that he was with the employee who was shopping for the Angel Tree Program," Nicole Brown said. "The employee of the Salvation Army. Crespin was helping the employee shop and load toys in the minivan. And then he drove off before they finished shopping."

Crespin is known to frequent the Farmington and Bernalillo areas. Call the police if you have any information on Crespin’s whereabouts. 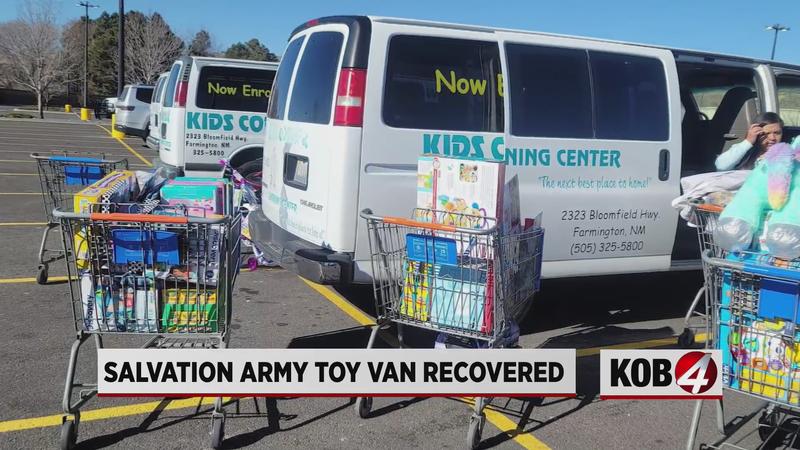