OCATE, N.M. – Evacuation orders are in place for multiple communities near the Cooks Peak Fire. Officials estimate the fire has rapidly spread to 51,982 acres as of Sunday afternoon.

Colfax County announced Sunday that residents of Miami may return home. Highway 21 remains closed due to fire activity, so residents will need to through Springer.

The Cooks Peak Fire will host a community meeting on Monday, April 25, 2022 at 7:00 pm. The meeting will be held in the Wagon Mound High School Gym at 300 Park Ave., in Wagon Mound.

The fire started on private land just north of Ocate in Mora County. There’s reportedly been no injuries or damage to structures, but officials said these windy conditions have made it difficult to fight the fire.

“It’s a very fast-moving fire, a fast-growing fire, it’s currently burning toward the east. It’s burning a few different heads so to speak, it’s kind of like a hand with a bunch of fingers, it’s spreading to the East with these red flag winds. These winds have been pretty hard for the past few days,” said Matthew Garcia, Cooks Peak Fire spokesperson.

The fire expanded from 21,200 acres to 28,200 between updates Thursday and Friday. State Road 21 remains closed.

There are evacuation centers set up at Memorial Middle School in Las Vegas, Wagon Mound Public Schools and Mora Schools. As for livestock evacuations, the American Legion Pavilion in Mora is available.

Residents in Colfax County should sign up now for Code Red. This system notifies residents of evacuation status. 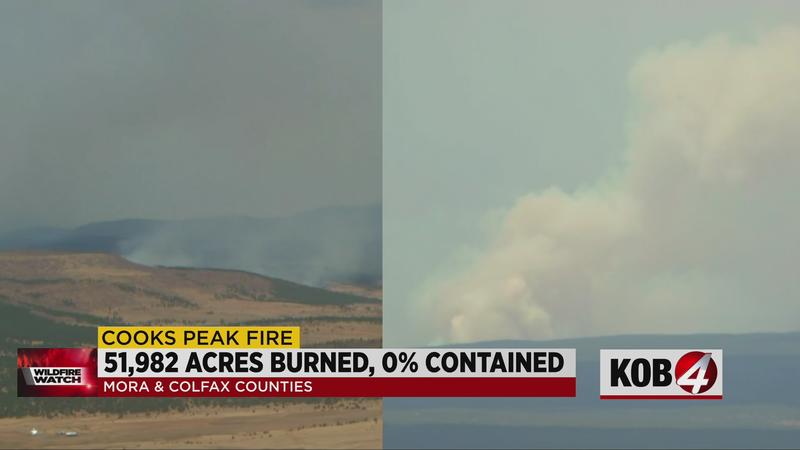 Cause: Unknown, under investigation

Fire behavior and fuels: The Cooks Peak Fire is actively burning in ponderosa pine, oak brush and grass. The fire is currently running, torching and crowning with short-range spotting.

Values at risk: Multiple communities within Mora and Colfax Counties