The Kiwanis Club on Sept. 19 will host the Corrales Ditch Run in partnership with an organization raising money for search and rescue.

Dave Gives Back honors Dave Cook, a husband and father of three who, in 2016, went to Colorado to climb a 14,000-foot summit. Dave, an experienced climber who previously scaled similar peaks, however, did not come home.

The family started the organization and, in May, they raised $18,000 for the mountain rescue in Colorado. This month, his family is honoring him by raising money for New Mexico search and rescue.

“Our goal is to continue this campaign to raise awareness and funds for search and rescue, all over,” Dave’s wife, Maureen Cook, explained. “I think it’s just a really beautiful way to honor Dave and also be within our community where he lived."

Maureen will be honoring the love of her life, Dave. The couple’s love story started while the two worked together at Intel. 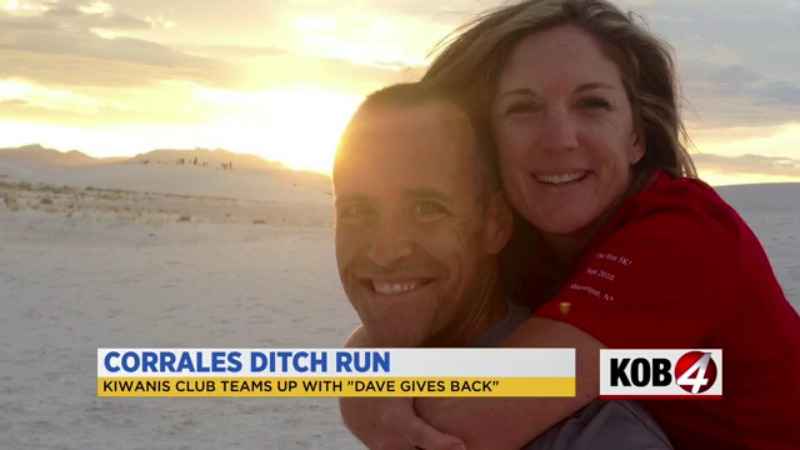 “You know we just clicked,” Maureen said. “I knew from the minute I met him that it was going to be a long-term relationship.”

The couple were married for 17 years and together they traveled the world, exploring their love of the outdoors.

The couple came back to New Mexico, where Maureen’s parents live and where the couple wanted to have and raise their kids. They shared their love for the outdoors with their kids who often went on climbs with Dave and Maureen.

“Short drive up for the weekend and he would climb a couple peaks and come back," Maureen said, "and we joined him on several, which was really fun family activity."

“He traveled immensely to climb," Maureen explained, "and then started climbing fourteeners which you know is 14,000 foot peaks and most of them are in Colorado."

“He is a very experienced mountaineer, very well trained,” she remarked. “He had climbed over 50 peaks in Colorado in his lifetime.”

In 2016, Dave planned a trip to Aspen to scale one of the fourteeners. However, it was a rare solo hike in September with school underway.

“He was staying with some friends of ours,” Maureen remembered. “She called me in the evening of Tuesday, when he was supposed to have returned earlier that evening, and she said I talked to Dave before he left and said that if he wasn’t back on time that she was going to contact search and rescue. And even when she said those words to me, I remember it was just like, what?”

The next morning, Maureen and the kids drove up to the area, where a new reality started to set in for the family.

“Lots and lots and lots of searches, initially, for the first week that Dave was missing. Just tons of boots on the ground, air searches, people were on horseback, dogs searches, and then the weather set in,” Maureen said. “Once the snow started falling, it really was fruitless.”

“We don’t know what happened – something tragic occurred and we’ve never found him,” she recalled about the search being called off due to the weather.

Looking back, Maureen remembers how tough it was to do anything – even to go to the grocery store. She didn’t want to break down or seem vulnerable.

“My mom said, ‘Maureen, you are such a strong person,’ and I screamed and said, ‘I know I’m strong, I’m not strong now.’," Maureen recalled.

The couple’s kids – Kate, Ryan and Sara – were only 14, 12 and seven years old, respectively, when Dave went missing.

“I knew I had it in me to get through this," Maureen stated, "but when you were raising three children who have no idea what just hit them, and I lost the love of my life and my life partner, you don’t feel strong. You feel like everything’s gone.”

Although Dave was gone, a piece of him remained back at home: A notecard detailing eight missions that he wanted to live his life by, which the family found above his desk.

“Dave had written his eight missions at a leadership conference that he had attended a couple years before he was gone,” Maureen explained. “The first one is to have a positive attitude. The second one is physical training and live healthy,” she listed. “Motivate yourself and others, earn respect, set goals, live with integrity, mentor and have fun.”

Maureen and her three kids live by these eight missions and the three goals that they write down on the first of every year. This year, especially on the five-year anniversary of Dave being gone, one of the family’s goals was to honor him.

“I knew one day I would have to be vulnerable and tell our story,” Maureen explained. “I want to now and that is the difference.”

Their oldest daughter – Kate – is in college, Ryan is a high school senior, and Sara is in 7th grade.

“They’re all at different schools and just finding their place in this world,” Maureen expressed. “We all took away so many positive learnings from Dave. They had confidence from the beginning that their dad was an amazing adventurer and mountaineer.”

Although Dave may be gone, their organization – Dave Gives Back – is now transcending Dave’s love for both his family and his passion.

“Being vulnerable is really hard but it’s been really special to share our story and our desire to help an organization that helps others,” said Maureen.

If you’d like to be a part of the run, you can find details at the organization’s website.