Gurule-Giron faces six criminal charges which include bid rigging, offering and receiving bribes, and general abuse of power while in office.

“The defendant, while the mayor of Las Vegas, abused her position and power and with information provided to her,” said Andrew Coffing, assistant attorney general. “She unlawfully influenced the bidding process in favor of her contractor boyfriend Marvin Salazar. The state intends to show you that she used the information she gained in her position to provide to him contracts, and she received a financial benefit in the form of gifts in kind.”

Gurule-Giron’s attorney, Johanna Cox, painted a picture for the jury that the real victim in this case was Gurule-Giron herself.

“You are going to hear from several witnesses that they did not like my client, that she was mean. Ladies and gentlemen, being mean is not a crime,” Cox said. “You are going to hear that she had a boyfriend. Her boyfriend was a contractor with the city of Las Vegas, there is no romantic scandal that is coming out. Ladies and gentlemen, a single woman dating a single man is not a crime in New Mexico, but the attorney general is going to put their tumultuous relationship on trial.” 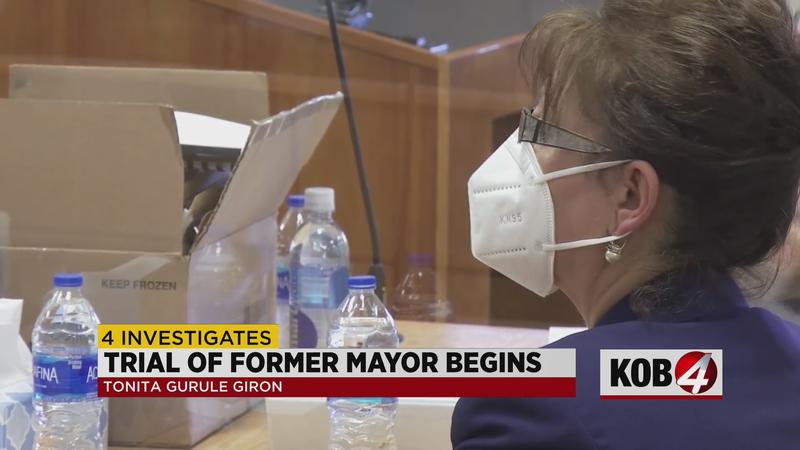 The charges stem from allegations that Gurule-Giron helped rig city contracts for her boyfriend, one of which was for a new floor in city hall.

State prosecutors put other flooring vendors on the stand who testified that the contracts had been rigged in favor of a contractor who nobody had heard of before.

“I definitely feel like we were cheating out of something when we should have won fair and square,” said Jessie Price, with Price Home Furnishings.

The first day of testimony did not go smoothly, mostly because some jurors did not show up. A panel of jurors was sworn-in Monday, and given instructions to arrive Tuesday at 8:30 a.m. When the trial resumed after lunch Tuesday, another juror never returned.

Since there are no alternative jurors in this case, the trial cannot afford to lose another juror or else the judge will have no choice but to declare a mistrial.