ALBUQUERQUE, N.M.— Hundreds of counterprotesters showed up to Civic Plaza Sunday in response to a planned Proud Boys rally.

The far-right extremist hate group is known to be racist, sexist, homophobic, and violent. However, members of the group did not show up.

“I think as you look around, you’re going to see that this is Albuquerque,” said Karen Bentrup, a counterprotester.

Counterprotesters said their message was the same whether the Proud Boys showed up or not.

“You’re all about hate and that’s not what we’re about. Albuquerque is about the diversity of the people here and we are working for liberation and inclusion and equity,” Bentrup said. 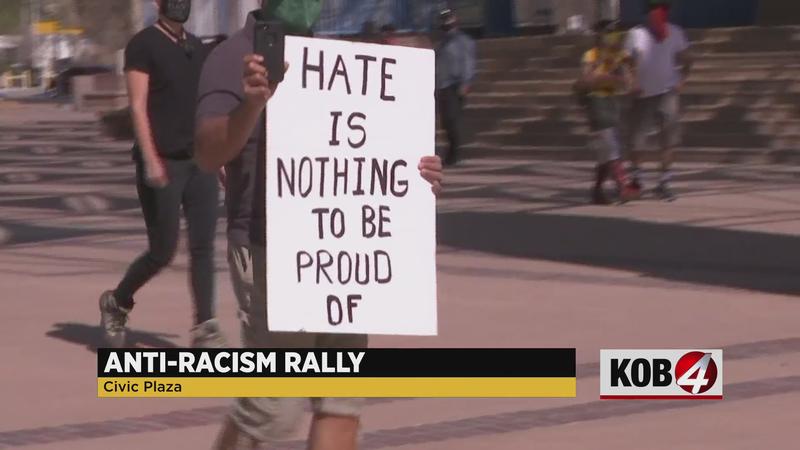 During the protest, there was a moment of tension between a man and a slew of counter-protesters. The man showed up to the rally with his family, a rifle, and a sign, then stood across the street. He told the crowd that he wasn’t a member of the Proud Boys.

APD later relocated that individual at the entrance of the Albuquerque Convention Center to de-escalate the situation, and cited the man on a charge of child endangerment.

While the Proud Boys did not make an appearance, there were numerous rumors that indicated the hate group would be hosting events nationwide. Counterprotesters said they anticipated Proud Boys would be in Albuquerque, too. APD and Mayor Keller said they were prepared for any outcome.

“We don’t want to see this in our town, and so I think that’s important for them to hear,” Mayor Keller said during a weekend press conference. “We will not be pushed around by a couple of Facebook posts or Proud Boys who try to intimidate us.”