ALBUQUERQUE, N.M. — Couy Griffin, Cowboys for Trump founder and Otero County commissioner, was arrested last year for his involvement in the Jan. 6 Capitol riots. He is still facing federal charges.

"My day consisted of everything non-violent and patriotic, but the media is trying to paint a different picture, and unfortunately, they’re having success at it," Griffin told KOB 4.

Cell phone video captured the violence and chaos of that day.

"I’ve seen the same videos that you have and there were people who acted extremely foolishly and recklessly and violently, and I don’t agree with any of that type of behavior," Griffin said. "Never have. It makes me sick whenever I watch it."

Griffin said he never entered the Capitol building. He said he went to pray and exercise his right to peacefully protest, but he was arrested for his involvement.

Brittany Costello: A number of people are facing charges, including you. Do you regret anything that happened?

Couy Griffin: As far as regret goes, I don’t have any regret from that day. I wasn’t involved in anything violent, or disruptive, or disorderly. I just went to stand in what I believe is my constitutional right, to peacefully protest. 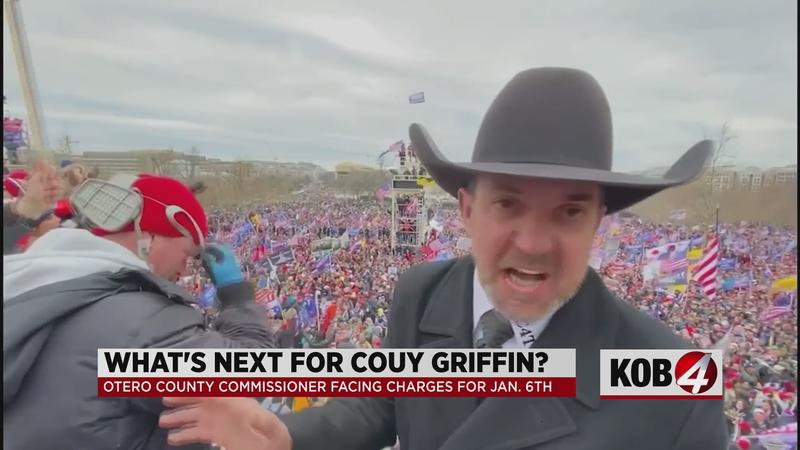 Just this week, Griffin’s attorneys filed new motions on his behalf – one demanding evidence and another claiming his charges are politically motivated. Griffin plans to ride the charges out to trial, claiming there’s more than meets the eye.

Couy Griffin: All of the videos that day that show Capitol police officers opening doors, fist-bumping people coming in and beating people up and assaulting people on Capitol grounds. That’s something the media is not telling us right now, not showing us – but it’s going to come out.

Brittany Costello: Do you personally have any of those videos?

Couy Griffin: You know, those would have to go through my counsel.

Griffin said he’s been offered two plea deals, which he has turned down. A year later, he still believes the election was tampered with. In fact, in Otero County he said they plan to conduct an election audit, looking for fraud. He said commissioners are expected to approve funding for that next week.