WASHINGTON, D.C. – An Otero County commissioner was handed a split verdict Tuesday on two misdemeanor charges for his involvement in the Jan. 6, 2021, U.S. Capitol attack.

Cowboys for Trump founder Couy Griffin was found guilty of a misdemeanor for entering restricted U.S. Capitol grounds and not guilty of engaging in misdemeanor disorderly conduct.

“I was really hoping and praying for a complete acquittal on both charges, but you know, I mean, we have to respect the decision of the courts at the end of the day,” said Griffin.

U.S. District Court Judge Trevor McFadden heard one day of testimony without a jury Monday before handing down the verdict against Griffin. Griffin’s trial was the second among the hundreds of federal cases arising from the attack.

KOB 4 talked to Griffin shortly after that ruling came down. Despite the conviction, he stands by his actions that day.

“There were bad actors on that day. There was some despicable violence that all of us condemn, the day, in general, I still wear as a badge of honor. I’m glad that I was there,” Griffin said.

His defense against the misdemeanor charge, for entering restricted grounds, was centered around where former Vice President Mike Pence was during the riots, claiming it could not legally be restricted if Pence wasn’t there.

He still claims he went to peacefully protest the results of the 2020 presidential election. Prosecutors argued successfully, however, Griffin knowingly moved past barricades restricting access to the Capitol.

He’s not sure what will happen next, whether they will appeal the decision or he will bite the bullet and face the consequences. As for his seat on the Otero County commission, he’s not ready to give that up.

But state law requires elected officials who are convicted of a felony to be removed. The Attorney General’s office sent KOB 4 a statement following the verdict Tuesday saying, they will evaluate whether this conviction, and other actions, warrant his removal from public office. 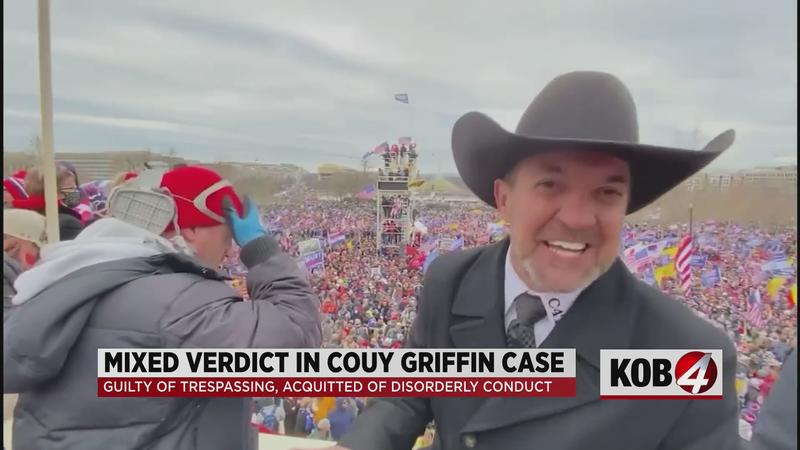