ALBUQUERQUE, N.M. -Organizers rushed to put the Fourth of July’s firework display together at the Balloon Fiesta Park this year.

Last year, the COVID-19 restrictions did not allow people in Balloon Fiesta Park and this year is different.

The City of Albuquerque usually has six months to prepare, but this year they had six weeks.

"We will be selling up to 3,500 tickets, and the tickets are sold per vehicle. You can bring in as many people in that vehicle as you like to come to Balloon Fiesta Park,” said Stephen Madrid, City of Albuquerque Parks Supervisor. “We are estimating maybe four people per vehicle. 3,500 times four is 14,000 people we’re expecting to be here.”

The tight turn around called for double time from several city departments. 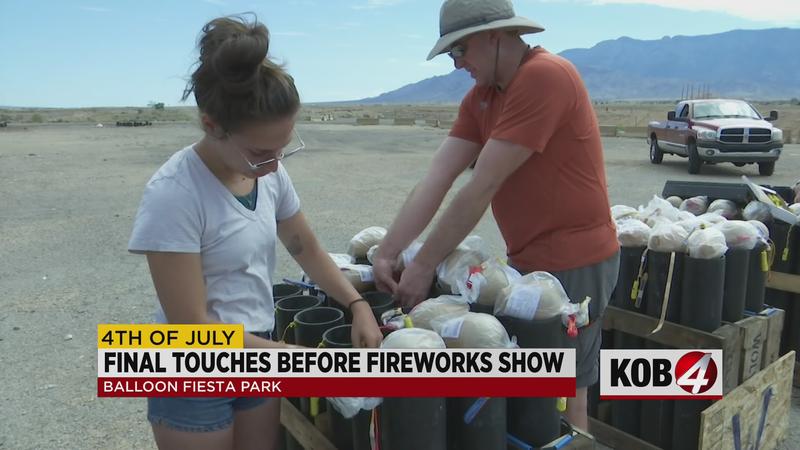 "This came together quite quickly,” said Madrid. “Solid waste management, City Security, Parks and Recreation, Parks management and some other departments to make this happen."

The show will go on without concerts.

"We’ll have vendors. It is a picnic style event. Right now, I believe we have seven vendors here, no alcohol, no glass. Bring your blankets, bring your umbrellas pop-ups," Madrid said.

"In the main body of the show, I think we’ve got about 875 individual displays and in the finales we’re looking at another 150, 200 or so in the finale. And then in the front line we have a number of box devices or cake devices that will be fronting the show with. Those range anywhere from 90 shots a piece, up to 300 shots a piece," said John Cates of Wolverine Fireworks.

About ten pyrotechnics worked all day wiring the shells, and dropping them into these firing modules.

"The little coils of yellow wires that you see are electric igniters that are attached to the fireworks. So the fireworks will get ignited electrically through a master control,” said Cates.

However, AFR and city officials have the power to delay the show, which is scheduled to begin at 9:15 p.m..