ALBUQUERQUE, N.M. – School crossing guards gear up every day to protect young pedestrians, including a local crossing guard who was honored for saving an elementary school boy’s life.

Fisher takes up her post at Louisiana Avenue every day, carrying her stop sign and blowing her whistle to stop traffic as she takes the safety of kids like Jody into her own hands – sometimes literally.

One Thursday last month, Fisher was helping Jody walk his bike across the road when it took an unexpected turn.

"All of a sudden this car just came from around the corner and hit the bike," Fisher recalled. "My natural instinct was just to grab the little boy close to me. If I wouldn’t have done that, it definitely would’ve been a different story." 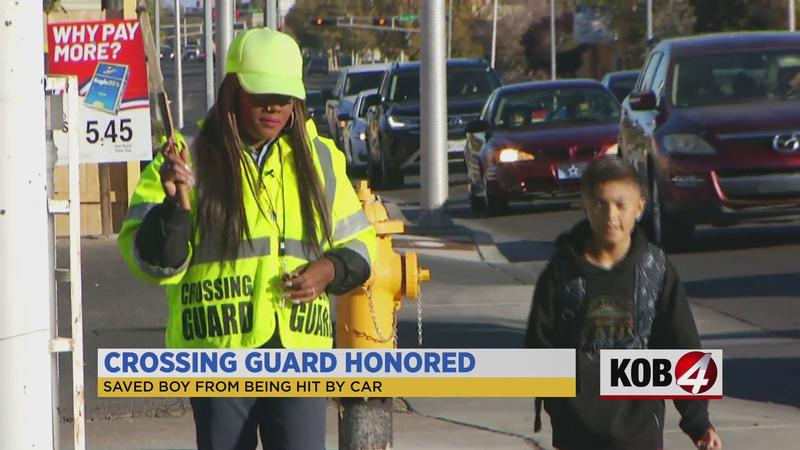 "She pulled me away from the car – otherwise I would’ve went under the car," Jody said.

Fisher made sure Jody was okay and kept the driver on-scene as she called the police.

The driver was cited for failing to yield and not having his license.

"After everything took place, I walked to the gas station right across the street, got him snacks and then took him to school," Fisher said.

Since the incident happened, Jody’s bike was fixed but he’s still worried about getting back on it. Jody was happy Fisher was there to save him and he and his schoolmates gathered with Fisher at Emerson Elementary to honor her for heroism.

According to Fisher, this was the first close call she ever had. However, she and other crossing guards often see drivers not paying attention or speeding.

"We see the same cars day in and day out," Richard Deischel, the crossing guard lead said. "They’re going to work but when they see the yellow flashing lights at an elementary school, they need to slow down to 15 mph."

Deischel and Fisher want to remind drivers to slow down and be cognizant of their surroundings, especially in school zones where guards constantly keep their heads on a swivel as they keep an eye on cars and kids at the same time.

"We really do put ourselves in jeopardy," Fisher said," and you know we are just there to protect the kids."

The City of Albuquerque is always recruiting for more crossing guards. Training starts in the classroom and more coaching is done in the field.

"You give the driver notice that they’re going to be coming out there and they teach them to use the whistles," Deischel said. "We get a lot of gripes about the whistles but that’s not really important because that’s their voice."