CUBA, N.M. – During the pandemic, the wheels on the buses for the Cuba Independent School District kept everything going round.

Even when students had to learn from home, bus drivers in the small town did not stop making pick-ups and drop-offs for students.

"During the pandemic, we were taking all of their work," said Ubaldo Kelly Maestas, a bus driver. "We delivered food, water, cleaning supplies, sanitation supplies."

Deliveries went out to hundreds of kids a day across several long routes.

"I’m driving about a hundred miles, more or less, every day on dirt," Maestas said.

It was not only school supplies. Drivers delivered mail, shoes and clothes as well.

"Parents would give us a list of clothes and then they would fill it out and then we would take it to the actual houses,” Maestas said.

“We help students and families with clothes, with food, with hygiene products as well as social, emotional support,” she said.

According to Dominguez, roughly 117 out of 700 kids in the district are considered homeless – 16.7% of the student population.

Everything at “Cuba Cares” is available to students at school for free. Bus drivers directly deliver what families cannot pick up themselves, and sometimes Dominguez tags along. 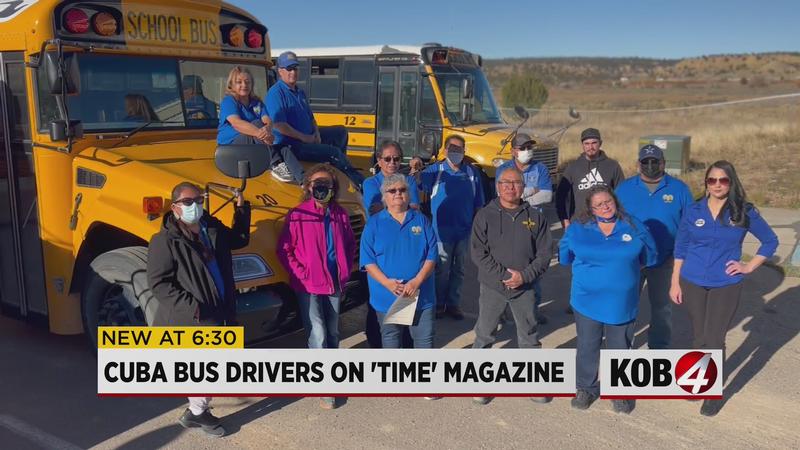 "I noticed the extreme need for basic necessities," she said.

Dominguez said donations spiked when an article in the Associated Press drew national attention to the small school district. It was not long before TIME Magazine called, and not only did these employees make the Sept. 13th issue, they were featured on the cover.

“I had no idea,” Dominguez said. “I was like what, TIME Magazine is coming to Cuba, New Mexico? Get out of town!”

"It started sinking in that we’re sharing the cover with famous people, I mean presidents, you know, people who have won the Nobel Prize, and we’re just lonely bus drivers,” Maestas said.

"I drove around Cuba with the windows down," one bus driver told KOB 4.

"I have a book signing," another bus driver said.

"I only charge $5 for an autograph," Maestas added.

The bus drivers were also recognized by New Mexico’s lieutenant governor, each receiving a certificate.

"Everybody got one, yes," Bus Driver Irene Aragon said. "It made me feel proud, proud of all my coworkers, proud of our community."

But the employees say the greatest honor of all was getting to see their kids every day.