ALBUQUERQUE, N.M. — It was more than a year ago when calls for change and police reform swept the nation. The murder of George Floyd sparked a push for change.

That’s the spirit behind a document posted on the city’s website, listed as a resource. But some are concerned portions of that document go too far, instructing people to support the measure to defund police.

There are many resources on the city website, but this caught the attention of someone searching the Office of Equity and Inclusion. Under "Culture Change" there’s a resource asking folks to come out as anti-racist and to join fights to defund the police.

“The city did not defund the police and, as a city, we value equity and inclusion,” said Giovanna Burrell, Culture Change leader with the City of Albuquerque. “We also understand that people have different lived experiences and understandings so those are just one of the things as we’re looking to make culture changes, really anchoring in that people dig into these deep and hard conversations.”

Burrell said that article was written by Albuquerque chapter of Showing up for Racial Justice (SURJ). It was published around the time of George Floyd’s murder.

“People were seeking many resources and help understanding at that time when there were a lot of conversations around defunding the police,” Burrell said. “So that is just one of the many resources we had around that time that talked about that.”

Also, in the article, is a call to free Clifton White. He’s an advocate once arrested by Albuquerque police but has since become the center of controversy.

“What I would encourage folks to really do is listen and one thing in culture change is opening up the space where people can have courageous, honest conversations,” Burrell said.

Burrell said her role with the city is to create those different learning experiences for people to engage in conversations around racism and social injustice. They have a number of resources on their website to showcase different views. 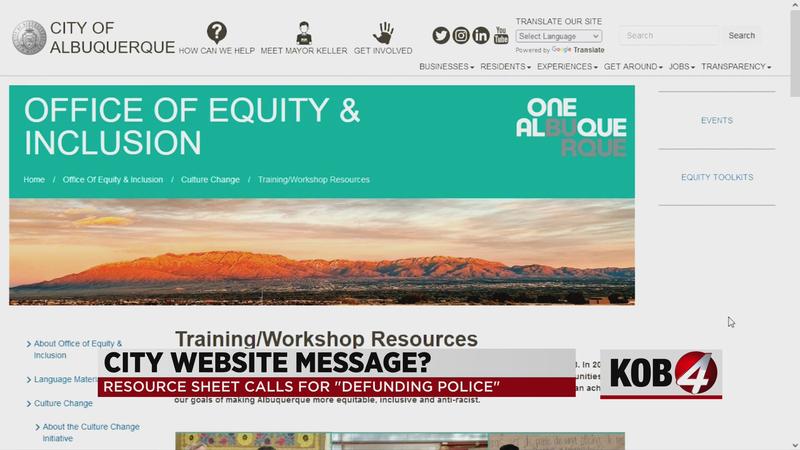