ALBUQUERQUE, N.M. — Not everyone is happy with how our recent elections turned out, but some living in Los Ranchos are concerned about their newly elected municipal judge.

During an online candidate forum held on Oct. 7, the current alternate municipal judge for the Village of Los Ranchos de Albuquerque and patent attorney Diane Albert was showing what citizens call “odd” behavior. Even those who work with Albert say it was very uncharacteristic. Previous public meetings from earlier this year show her behavior was nothing like what people saw during the recent forum.

Click the video at the top of this page to see clips of the forum.

A viewer was watching a forum for research on how they would vote. After seeing the candidate’s performance and finding out she won, they wanted to make sure was nothing seriously wrong.

KOB 4 spoke with Albert to find out and she tells us it was the result of pain medication she took after dental surgery. 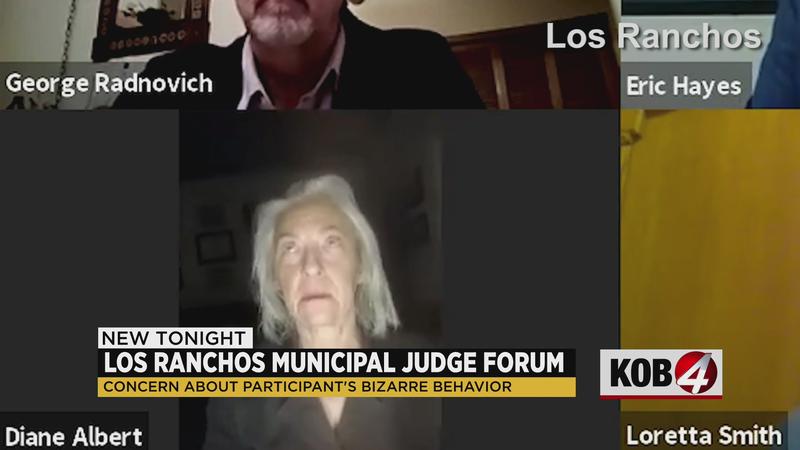 "That morning I had several hours of dental work, several root canals," Albert said. “I was given opioid medication for severe pain that day and I had a reaction to it because I have never taken that medication before."

At the start of the forum, Albert said she felt OK, but it progressively got worse.

"I had really some kind of, I don’t know, psychotic episode or something and I totally was not myself," Albert said. "I take this position extremely seriously."

Albert said she wishes she did not participate in the forum but felt citizens would think she was lazy or didn’t care about the community by not participating.

Albert, again, said she takes this position very seriously and her coworkers KOB 4 spoke with agree.