ESTANCIA, N.M. – If you want to attend a town hall meeting in Estancia, you’re going to have to be armed.

The new rule was approved during a meeting last week by town leaders and now they could be hit with a lawsuit for it.

"In order to attend an Estancia town meeting, one must be legally armed,” said Estancia Mayor Nathan Dial.

Dial proposed the rule at their last meeting – it passed by a 3-2 margin, with Dial as the deciding vote.

"This rule is in direct response to what the state did,” said Dial.

Dial said after it was decided that lawmakers couldn’t carry in the Roundhouse, he wanted to implement the exact opposite.

“It’s designed so those who want to have guns can’t be told by the state that this rule applies to municipal levels. As shock value, I wrote it very vague."

The way it is written, Dial says the term "legally armed" is very much up to interpretation.

"You can come with the knowledge to fight for what you want, that’s armed," Dial said.

While the majority in attendance were in favor of the rule, there was some pushback, including from the town clerk.

"I think to say it this way is not in the best interest of the town."

But it’s not just some residents who are against it.

Maria Martinez Sanchez, deputy legal director for the ACLU of New Mexico, said there are several issues with this rule, including the fact that it is so unclear.

"The vagueness of the rule itself makes it unconstitutional,” said Martinez Sanchez.

She said the ACLU of New Mexico will file a lawsuit against the town if they don’t change or rewrite the rule.

"The only people he is hurting is the town of Estancia, because he is unnecessarily dragging their town into litigation that doesn’t need to happen," she said.

Dial said he will be in talks with the ACLU about this. The rule is set to start Dec. 7. Martinez Sanchez said the lawsuit will be filed before that happens. 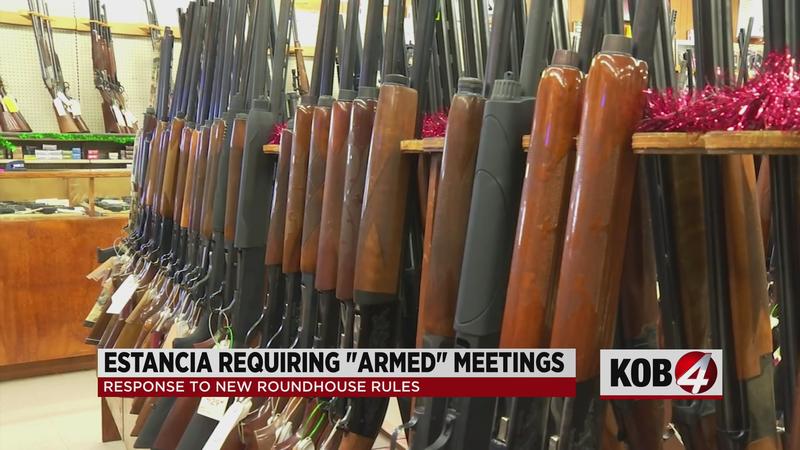