ALBUQUERQUE, N.M. – About 15,500 homes in the path of the Calf Canyon and Hermits Peak fire are under mandatory evacuation, and more than 150 have burned.

Some of those evacuees are set up at the old Memorial Middle school for the night. Meanwhile, others are staying with family and friends, even camping out in an RV.

“State police went over and told us that we had to evacuate, so we just did,” said Lalo Lovato, evacuee.

Lalo and Linda Lovato were forced to flee their home in Montezuma as the fire grew.

The couple is now staying in their RV, but are thankful their situation isn’t worse.

"It’s nice to have something. I feel sorry for people that don’t have nothing to stay in. Thats my issue, but we gotta be grateful that we have what we have. And some people are homeless and that is bad. When they’re staying in their cars and don’t know what to do, then you see that we’re OK,” said Lalo.

“Yes it’s kind of crowded but it’s our home now. And we have to accept that,” said Linda.

For evacuees with nowhere to go, 30 cots are set up inside the gym at the old Memorial Middle School in Las Vegas, about half are full.

National Guard members and volunteers are collecting donations from the community, food, clothing, household items for evacuees and those who’ve lost everything. Members of the community – stepping up to distribute it all.

“We take care of our own we’re a little family and I mean it we’ve been getting hugs today, it’s been very emotional. It’s been a lot of hugging, a lot of crying, a lot of channeling our energy, but we appreciate everything we’ve gotten,” said April Hoogerhuies, evacuation shelter organizer.

Janna Lopez is helping to run the evacuation shelter – even though she had to leave her own home.

“So far my house is still standing, but it’s surrounded by smoke,” said Lopez. “I came 12 days ago and haven’t left to feed, to hug, to listen, to comfort, and even though I’m evacuated I am not gonna stop giving.”

As for the Lovato’s, tonight they and so many other evacuees are hoping the fire spares them.

"I’m just hoping that my house is fine. I don’t know, so I pray," said Linda.

A real community effort that crossed state lines, KOB 4 met a man Wednesday who drove all the way down from Denver just to deliver a truck load of bottled water. 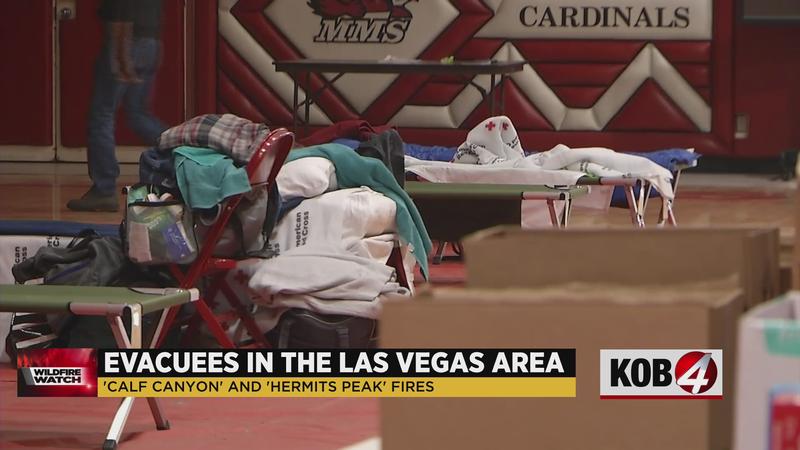