ALBUQUERQUE, N.M. – A record-setting revenue of $8.8 billion is expected in New Mexico’s next budget year — which starts in October.

The biggest reason why the projection skyrocketed is a boom in oil and gas profits. Also, an expected increase in consumer spending and income from federal contributions such as stimulus/unemployment checks.

A committee of lawmakers heard the news, Aug. 27 — from state economists at Taos Ski Valley.

"It’s great news for New Mexicans. We haven’t had a lot of good news in the last year,” said Rep. Patty Lundstrom, (D) McKinley County. "Super unexpected, kind of blew our socks off when we saw that kind of increase."

She gave KOB 4 a preview of budget details the committee may recommend to the house and the senate.

Lundstrom said the influx of cash could mean more agreement than usual between the two parties.

"The governor is incredibly optimistic about the latest revenue projection.”

Adding that the governor is set to reveal her spending priorities later this fall and that addressing economic recovery and crime are expected to be among them.

"I would describe it as a very false economy myself, other than the oil revenues, which are just zooming,” said Woods.

Woods said he wants to see the money go to economic development and road and broadband projects.

"We can make a difference in New Mexico if we can improve our infrastructure,” said Woods.

Three other areas of funding to note: the projection includes a massive jump of $1.5 billion to go into the "rainy day" fund and for the early childhood education fund.

Also — the projections for the 2023 budget year that starts a little over a year from now — is expected to be 18% higher than this record-setting revenue total.

The debate is set to ramp up during the legislative session, which is scheduled to start in January. 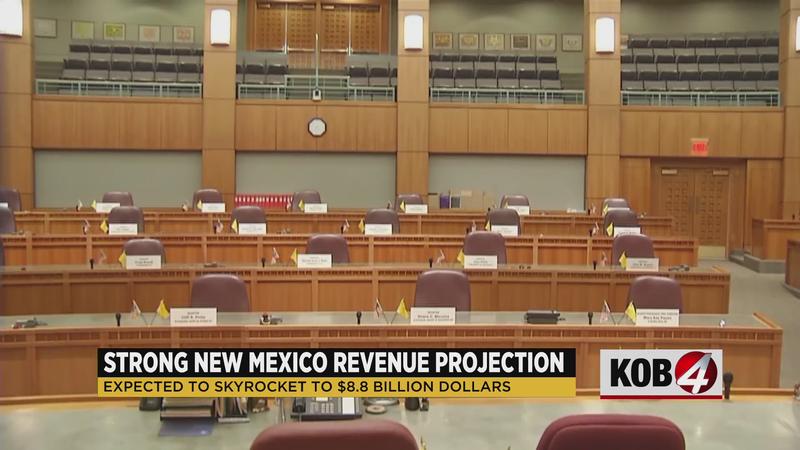