ALBUQUERQUE, N.M. – The Federal Aviation Administration is speaking out about some controversial regulations that could affect ballooning in Albuquerque.

Local balloon pilots say newly-enforced and controversial airspace rules from the FAA are severely limiting where they can fly and they’re threatening to deflate the local ballooning industry.

In a statement sent to KOB 4 the FAA said the following:

"The FAA has determined that large events such as the Albuquerque International Balloon Fiesta will not be affected due to advanced planning, waivers, Notice to Air Missions and other mitigations for a large airshow. The FAA is leading a cross-organizational workgroup to explore possible solutions to other concerns relating to balloon flights in the ABQ area."

The regulations, which pilots say have only been enforced since September, require all aircraft to use a special piece of GPS technology while inside Class C airspace. That includes almost all of Albuquerque and parts of Rio Rancho.

Balloon pilots say they would be happy to comply, but there is not currently a way to install that device on balloons.

"We have no electrical systems inside hot air balloons. So we can’t comply of the rule. They’re enforcing a rule, and they’ve given us no directions on how we can comply with it," said President and CEO of Rainbow Ryders Scott Appelman.

Balloon Fiesta organizers confirmed they will apply for a waiver for the upcoming 50th anniversary of the Albuquerque International Balloon Fiesta.

Several members of New Mexico’s congressional delegation have spoken out against the regulations and are working to secure a permanent waiver for balloons. 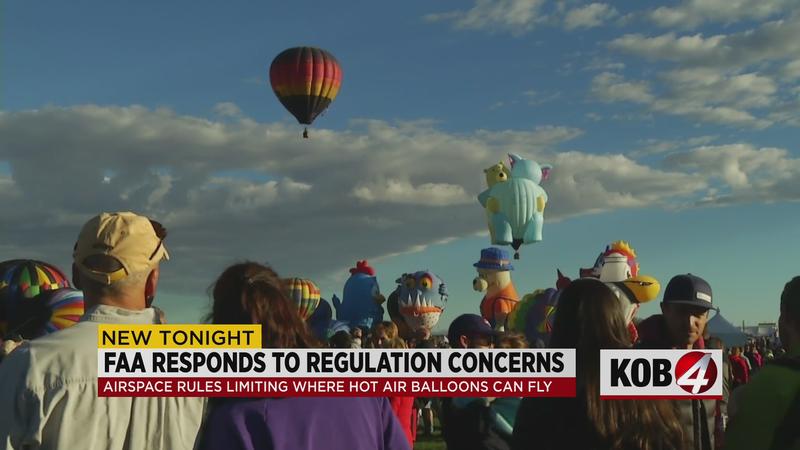