The political ad criticizes Mark Moores for taking federal stimulus dollars for his small business, even though he disagreed with some legislative ideas as a state senator on state-issued pandemic relief.

Stansbury: I’m Melanie Stansbury and I approve this message.
Announcer: While New Mexicans struggled, Republican Politician Mark Moores was lining his own pockets. Moores opposed every measure to help people in the pandemic while opposing sick leave for essential workers, opposing relief checks for families, even opposing President Biden’s American Rescue Plan. Yet Moores took nearly $2 million in PPP money for his personal business. $2 million in payments as recent as February, but opposing help for us. Republican Mark Moores. He’s not for New Mexico.

UNM Political Science Professor Lonna Atkeson evaluated the merits of the ad with the 4 Investigates Fact Check Team and also concluded, Stansbury’s ad is misleading and in some parts completely inaccurate. 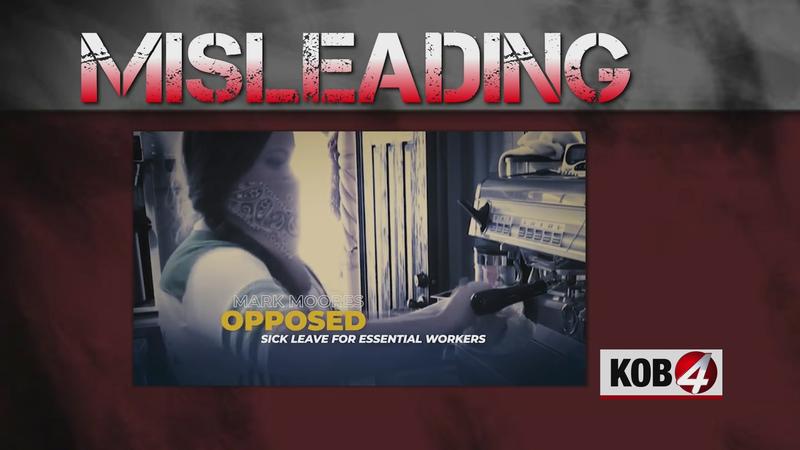 Mark Moores owns a pathology lab in Roswell, which was one of the first labs in New Mexico to process COVID-19 tests. Like many business owners, Moores applied for and received federal stimulus dollars. By all accounts, Moores legally and ethically obtained the federal help for his small business, making the line, “Republican Mark Moores was lining his own pockets,” unfair and untrue.

“That’s completely unfair because that suggests he was writing some sort of legislation that gave him some sort of kickback and in fact he didn’t do that,” Professor Atkeson said.

As a state legislator, Moores was not a part of Congress’s process of authorizing trillions of dollars in pandemic relief.

The ad states, “Moores opposed every measure to help people in the pandemic.” That is easily proven as false. Legislative records reveal Moores voted in favor of a number of pieces of legislation that aimed to help New Mexico businesses and families. Since the pandemic began, the New Mexico Legislature has met in three special sessions and one regular session. Records of all the sessions show Moores voted in favor of reducing gross receipts taxes for struggling business, waiving liquor license fees in 2021 for the beverage industry, and a number of other bills that were part of the state’s pandemic relief aid.

“It’s inaccurate,” Professor Atkeson said. “Moores has a mixed record, because there many pieces of legislation that were presented, but it’s very clear if you look closely at the record that he voted in favor of several measures that helped New Mexicans across the state, especially New Mexico businesses.”

Legislative records do show that, as a state senator, Stansbury is correct in stating that Moores opposed controversial legislation that requires employers to pay sick leave to its workforce at a rate of 1 hour for every 30 hours worked. But this bill was also widely opposed by many in the business sector and by most, if not all, republican legislators.