VALENCIA COUNTY, N.M. – More than two years ago, three men were shot and killed at a house party in Valencia County. Investigators arrested three local teens, Robert Wilson, Brandon Dowdy and Anthony Williams, who was charged as an adult.

The victims’ friends and family say more than two years later, they are still fighting for justice. The three alleged killers were recently offered a plea deal, which would allow all of them to walk free within the next six months.

On Wednesday, dozens gathered outside the Valencia County courthouse to honor and remember the lives of Joseph Santiago, Nathan Morrison, and Darren Bernal.

"All three of these individuals were family members they had fathers, mothers, they have children, brothers and sisters," said Alfredo Gomez, a close friend of one of the victims.

"My dad, his name was Darren, I loved him and I just miss him," Josiah Bernal said. “My dad, he was a hardworking man, took care of me and my sister, anybody that he could have, kept us under a roof, gave us food, made sure we were safe, and with him gone it’s just — it’s different. It doesn’t feel like that anymore." 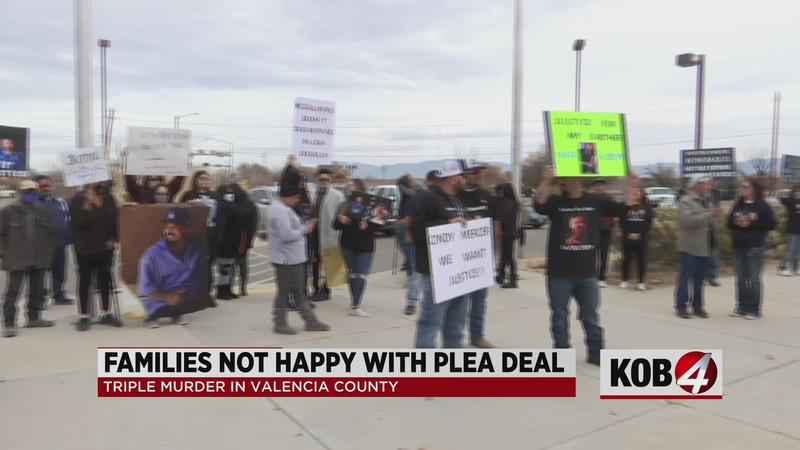 Many were upset with the possibility that these suspects could get out, and soon. Last month, the attorneys of the three suspects filed for their charges to be dismissed. They claimed the suspects acted in self-defense. Now, with the plea deal, Wilson, Dowdy and Williams are charged with lesser crimes that come with much lesser sentences.

"We feel that a criminal act was conducted and we feel these individuals are getting off with too light of a sentence and they need to be held accountable for their actions," Gomez said.

The victims’ families say they will not stop fighting, until justice is served. “They took lives, take their freedom, period," said Nathan Morrison’s brother, Isaiah Martinez.

"We get a sense of relief from the courts to try to fight for us, fight for these voices that can’t fight anymore, these guys can’t come and fight for themselves anymore, we have to be their voices now,” said Danny Bernal, the brother of Darren Bernal.

KOB 4 reached out to the district attorney’s office for a response on the change in this case. They sent the following statement:

"On May 2, 2019, a grand jury found probable cause for Anthony William, Brandon Dowdy and Robert Wilson for first degree murder and conspiracy to commit first degree murder. Unfortunately, after further review of the evidence, which included pre-trial interviews of cooperative witnesses, it became apparent the evidence was insufficient to proof beyond a reasonable doubt Williams, Dowdy, or Wilson committed first degree murder. After consulting with the family of the deceased victim, pleas were offered to reflect the charges the state felt could be proven beyond a reasonable doubt at trial.

We understand the victim’s families are disappointed with the resolution of the matter. Sometimes justice doesn’t meet the expectations of the victims, and we understand the family’s disappointment with this decision. However, we have a legal and ethical obligation to protect both the rights of the victims and defendants. To take away someone’s liberty without proper evidence, goes against our obligation to pursue justice for all."

According to court documents, Brandon Dowdy has his plea hearing next week on Dec. 15, and Robert Wilson has a jury trial in March of 2022. It is unclear when Anthony Williams will return to court. All three remain in custody for now.