VALENCIA COUNTY, N.M. – A triple homicide case in Valencia County may finally get a resolution after two and a half years, but the families of the victims say justice is not being served.

The families of Joseph Santiago, Nathan Morrison, and Darren Bernal, who were all killed at a house party in 2019, explain their frustrations with the plea deal the district attorney has offered the suspects.

"Finally when I got to the line that says do not cross police activity a detective walked up to me and pulled me to the side and let me know my brother and two other individuals were murdered by three other guys," Darren’s Brother Danny Bernals reflects on April 20th 2019.

Soon after the District Attorney charged Williams with three counts of first degree murder, as an adult at 17. The other two suspects were charged with murder and conspiracy.

Then, last month defense attorneys filed motions to get the charges dismissed. They say the DA at the time, made a mistake arguing the suspects were acting in self-defense.

“The past two years of our investigation demonstrated conclusively that any actions taken by Mr. Dowdy, as well as Mr. Williams and Mr. Wilson, we’re taken in self-defense and in defense of each together following an altercation, which included the firing of a .45 caliber handgun, initiated by others at the party. The charges in this case were a rush to judgment by law enforcement and the initial prosecutor. Mr. Dowdy is happy that the State has agreed to a plea agreement that is a just and fair resolution.”

After these motions were filed the family was told of the new charges. 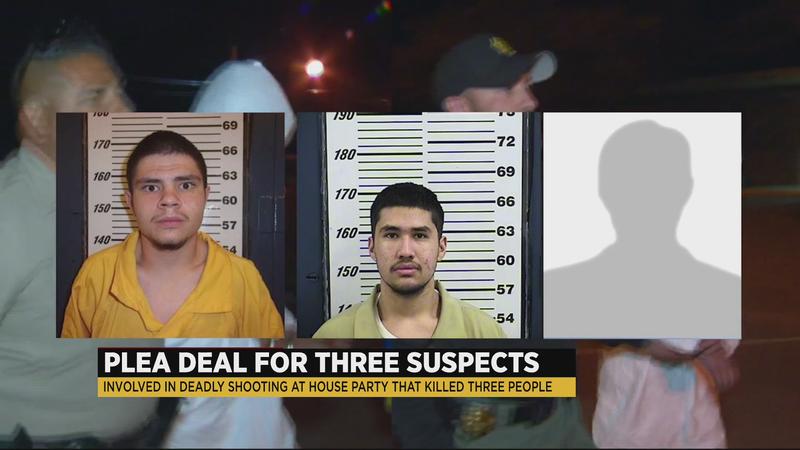 "They have informed us they had come to a plea agreement. At first they were talking about evidence and so on but then after being there a while it did come out that they the DA’s office made a mistake charged three murders wrongly," Nathan’s Father Phillip Morrison said.

According to the plea deal that will be offered in court on December 15th, The shooter, Anthony Williams, will now be charged with voluntary manslaughter. Since he was a minor when the crime was committed he will then be released when he turns 21, this April.

The other suspects, Wilson and Dowdy will be charged with aggravated assault and they will be released on the 15th, after they were in jail for the last two years and will be on probation for the next two years.

But the family of the victims say this is not enough.

A new District Attorney was elected in the middle of this investigation.

KOB 4 reached out to the DA’s office to get an explanation of what changed in this case, they said in a statement:

“On May 2, 2019, a grand jury found probable cause for Anthony William, Brandon Dowdy and Robert Wilson for first degree murder and conspiracy to commit first degree murder. Unfortunately, after further review of the evidence, which included pre-trial interviews of cooperative witnesses, it became apparent the evidence was insufficient to proof beyond a reasonable doubt Williams, Dowdy, or Wilson committed first degree murder. After consulting with the family of the deceased victim, pleas were offered to reflect the charges the state felt could be proven beyond a reasonable doubt at trial.

We understand the victim’s families are disappointed with the resolution of the matter. Sometimes justice doesn’t meet the expectations of the victims, and we understand the family’s disappointment with this decision. However, we have a legal and ethical obligation to protect both the rights of the victims and defendants. To take away someone’s liberty without proper evidence, goes against our obligation to pursue justice for all.”

The District added, this case was originally scheduled to go to trial on Dec. 14th, 2020 but due to COVID lock downs the case was delayed a year. We asked if this case did go to trial in 2020 if they think the suspects would be found guilty they said with the present evidence the do not think they would win this case.

After the plea deal was presented to the families of the victims they say the last two years have been more than frustrating and now they have less faith in our justice system.

"I didn’t realize how much rights these murders have more than the victims more than the families that is a frustration," Morrison said.

But their frustrations don’t end there.

"My biggest frustration is I never get to see this man again right here and this man can now not raise two kids they are fatherless now," Bernals said, holding a picture of his brother.