ALBUQUERQUE, N.M. – Three years ago, on the night before Thanksgiving, Jakob and Kayden Montoya were killed less than a mile from home by a speeding driver.

The young cousins’ family and friends did their best to focus on the good times – as they still wait for justice.

The suspect in this case is still awaiting trial, out of jail. The Montoya family said that’s the worst part – trying to move forward everyday while their fight for accountability holds them back.

Too many people have lived without Kayden and Jakob Montoya for too long.

"They were my whole heart and soul. They were just everything to me,” said Priscilla Padilla Griego, Jakob and Kayden’s grandmother.

And then sometimes – that dreadful night, and its consequences, feels like a split second in time.

"It was unbelievable to me that the world didn’t stop,” said Athena Lopez, Kayden’s girlfriend.

Lopez has had to go on without the love of her life, Kayden.

"He was a beacon of light, that one. He was an incredible support system, he was my best friend,” Lopez said.

Kayden and his cousin, Jakob, ran out for a quick errand the night before Thanksgiving in 2018. They thought they’d be gone for just a few minutes. But they both were killed in a crash at Universe and Irving in northwest Albuquerque – less than a mile from Kayden and Lopez’s home.

Three years later – Martinez is still waiting to go to trial and he’s out of jail. He’s also been granted several out-of-state trips to visit family.

"My heart sinks every time I hear another verdict about somebody who was killed in a DWI accident and the person driving the other vehicle, the person driving drunk, was you released of all charges, found not guilty,” said Lopez.

But they continue to put one foot in front of the other, remembering Jakob and Kayden.

"You just have to remember the goodness in both of them,” said Griego.

Martinez will have a hearing next month to potentially set a trial date. 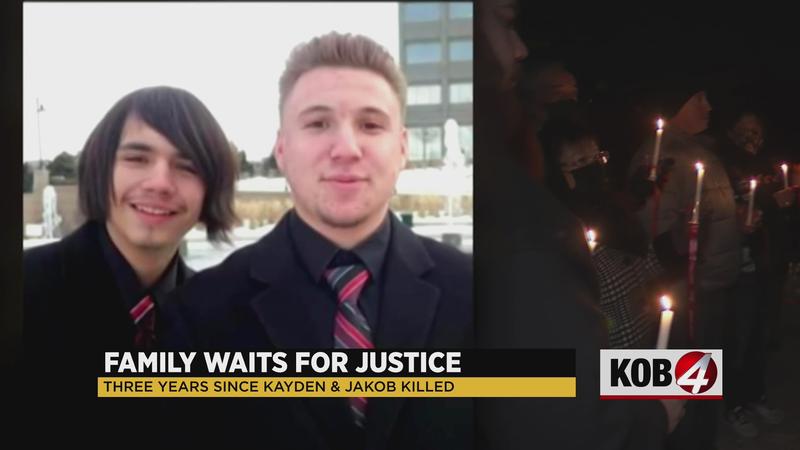